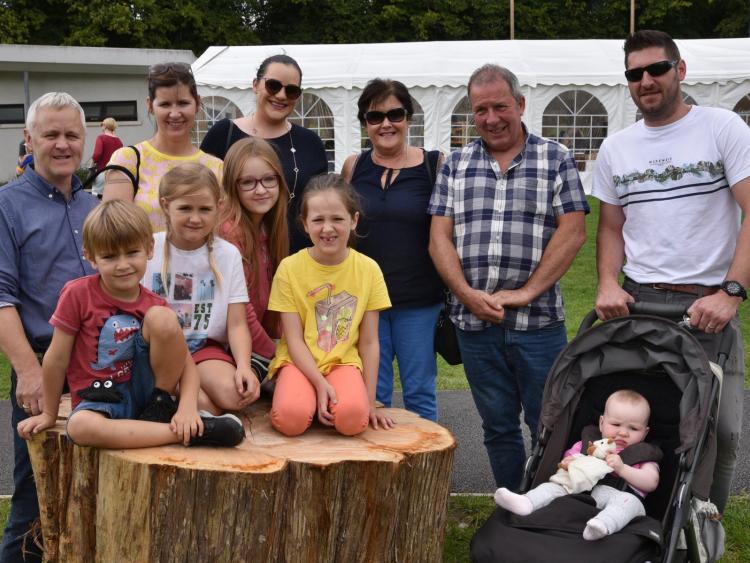 Derek and Bláthnaid McCullagh with Harry, Kate and Niamh along with Aisleen Dowling, Catherina and Jimmy Cullen, Kevin Dowling, Saoirse and Aoife at Town of Books PICTURE: HARRY REID

Barrow loads of bargains greeted people at the Town of Books Festival in Graignamanagh over the weekend - an event which is very popular among Carlow people as well.

Over 30 booksellers descended on the town by the River Barrow from Thursday night onwards and they took over the streets and quay-side and brought a Mediterranean feel to the heritage town.

Visitors meandered through the place picking up books, atlases, comics and magazines.

There were readings, creative workshops for young and old, outdoor and indoor music sessions and a host of tempting foods and crafts.

On Thursday night, chef, food lecturer and television and radio personality, Edward Hayden filled the local library for his one-man-show based on the works of John B Keane.

The weekend really started on Friday with a meet and greet with Kilkenny author, Niamh Boyce and a gin tasting event courtesy of Ballykeefe distillery at the library.

Another highly anticipated event, The Best Night in The Barrows Keep, restaurant over the bridge in Tinnahinch, attracted a huge number of women for all sorts of fun and advice from an expert panel.

On Saturday, the Barrow Valley Activities Hub was the centre of operations while Abbey Hall and many other venues were full of books and other interesting curiosities like old maps.

One of the highlights for many were the two guided tours through Ireland’s oldest working woollen mill, Cushendale Mills, where Philip Cushen explained Graignamanagh’s link with wool since 1204 and spoke of his family’s six-generation history of weavers and on the provenance of our Irish wool fabric which can be traced ‘from fleece to fabric.’

The literary fancy dress was hilarious and it was great to see so many local people taking part.

Among other things on the Sunday, Graignamanagh Historical Society offered free tours of the town which were fascinating.

Bookseller, Eddie Lyons of Lyonshill Books, said that he will be back next year.

“It was a great weekend, exhilarating and I sold a few books, bought a lot of books and met characters, dealers and friends,” he said.

“Full credit to the organising committee, who were always available, problem solvers. Nothing was a problem, especially so with Martin O’Brien, indefatigable and witty to boot,” Mr Lyons said.