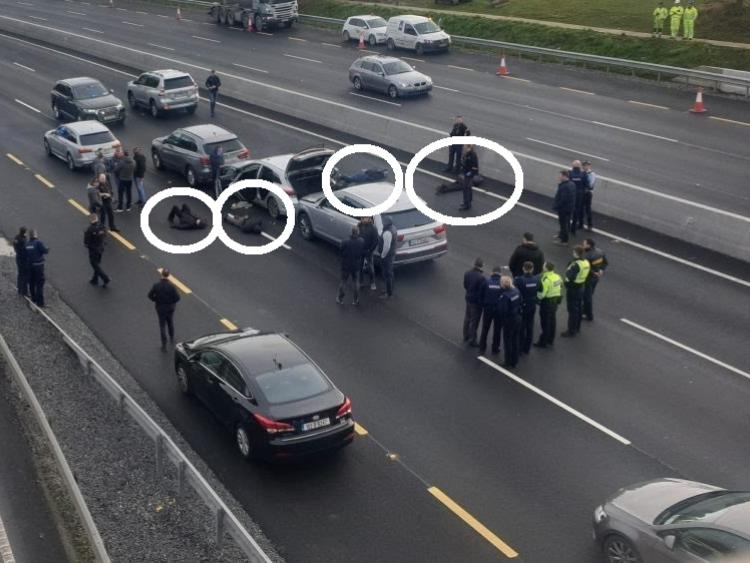 Searches carried out following the arrests of four suspects on the M7 near Naas last week have led to the seizure of cash, drugs and vehicles in the Dublin area.

In a dramatic operation last Thursday morning, armed Gardaí stopped a car near the ‘Naas Ball’ at Junction 9 and arrested the men aged in their 30s, 40s and 50s under Section 30 of the Offences against the State Act, 1939.

In photos of the scene, four men dressed in dark clothing can be seen handcuffed on the tarmac of the motorway. Some are lying face down on the ground.

It’s understood up to 30 uniformed and plain clothes officers and around 10 Garda vehicles were involved in the incident.

The car carrying the suspects appears to have been hemmed in by Garda vehicles to ensure it came to a stop. 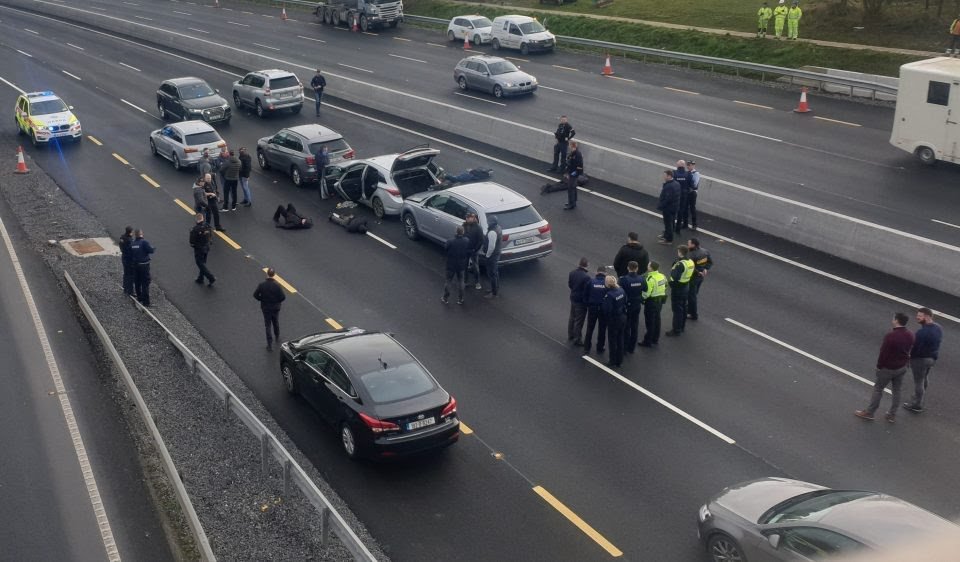 The Garda operation, which was spread across three lanes and the hard shoulder of the M7 - caused tailbacks for northbound motorists for a time.

The incident was believed to have been linked to an armed raid in Co Wexford earlier that morning.

Four men entered a garage at Clonroche and threatened staff members with a handgun.
It’s understood the males left the scene in a silver-coloured Hyundai car.

No shots were fired and no one was injured during the incident.

During a follow up operation Roads Policing Units observed the car travelling towards Dublin on the M9 motorway.

This car was then intercepted a short time later by members of the Emergency Response Unit (ERU).

Follow-up searches after the M7 arrests were conducted in the Windmill Road area of Crumlin, Dublin 12 on Friday and Saturday and cash of various currencies and denominations was seized (approximate value €135,000).

A quantity of cannabis (pending analysis), a van and two motorcycles were also seized during the course of the search.
Gardaí said no new arrests have been made and investigations are ongoing.

The searches were carried out by officers drawn from Detective Units in Crumlin and Sundrive Road Garda Stations with the assistance of local uniform Gardaí, the Garda National Drugs and Organised Crime Bureau, Emergency Response Unit and Armed Support Unit.