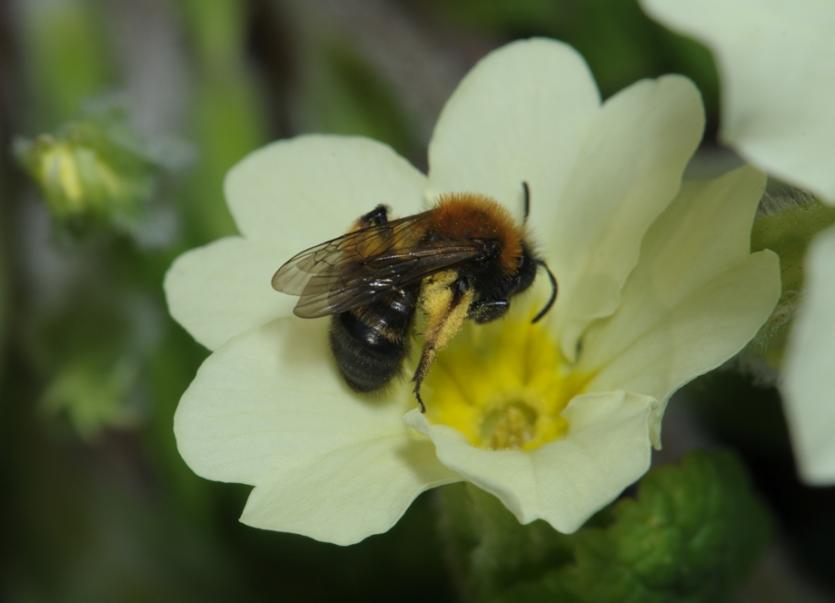 Bees need flowers and on World Bee Day, Teagasc reminds farmers to allow space for common wildflowers to grow and flower on farms.

Early in the year, bees get pollen and nectar from willow, hazel and primrose. Now, whitethorn, bluebells and dandelions are important, while later on blackberry, woodbine and heather will feed the bees.

With its late flowers, ivy is the last source of food at the end of the year.  A diversity of common flowering plants is needed in hedgerows, field margins, field corners, along farm roadways and around farmyards.

The quest for neatness should not override ecological considerations. Allow plants to flower before cutting.

A current cultural challenge is to get recognition that common ‘weeds’ are wildflowers which may (or may not) be growing in the wrong place.

The only plants which are universally undesirable are Invasive Alien Species such as Japanese Knotweed; while noxious weeds (ragwort, thistle, docks, male wild hop, common barberry and wild oats) must be controlled under the Noxious Weeds Act.

In Ireland, there are twenty bumble bees, 77 solitary bees and one honey bee. Unfortunately, one-third of our bees are in danger of extinction.

Bees are also indicators of general biodiversity, which is in decline. Ireland has become only the second country in the world to declare a climate and biodiversity emergency.

One million animal and plant species are threatened with extinction. While biodiversity has always evolved, changes in the past fifty years have been more rapid than at any time in human history.

Species extinction rates over the past few hundred years have increased by as much as 1,000 times the background rates typical over the earth’s history.

Recent research by Catherine Keena, Teagasc Countryside Management Specialist, found that farmers were positive towards biodiversity, but understanding of biodiversity was relatively poor, in particular: the value of common habitats; how species decline relates to individual farms; and how the absence of a ‘silent spring’ analogy masks serious declines. Biodiversity is one of the principal public goods to which agriculture can contribute.

The All Ireland Pollinator Plan is an initiative bringing farmers, local authorities, schools, gardeners, and businesses together to try to create an Ireland where bees can survive and thrive.

In a Teagasc video released this week, Aoife Leader, Teagasc Walsh Scholar explains the importance of bees to the environment and biodiversity on Irish farms. Aoife identifies the simple measures farmers can take to help protect bees on their farm. https://www.teagasc.ie/environment/biodiversity--countryside/farmland-habitats/bees/