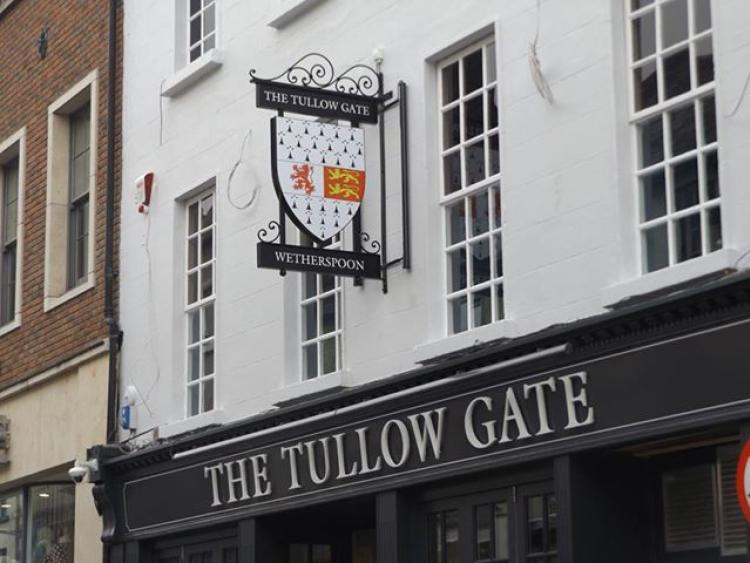 The new front of the premises

Pub operator JD Wetherspoon is to open its new pub in Carlow on Wednesday, May 1, with the creation of 65 new jobs.

Read also: PICTURE: Front of Carlow pub gets redesign for the opening of JD Wetherspoons'

The company has spent just over €3 million developing the outlet, on the site of the former Traders Bar, in Tullow Street.

The Wetherspoon pub, which will be called The Tullow Gate, will be managed by Damien McConomy.  He was previously at Wetherspoon’s first pub in Ireland, The Three Tun Tavern, in Blackrock.

This long-standing, three-storey building is situated near the foot of one of Carlow’s oldest streets, which runs east-west through the town.

The pub takes its name from the Tullow Gate, one of the four town gates in the old walls around Carlow, that once stood near to the site of the new pub.

Food will be served throughout the day, from opening until 11pm, every day.

The new pub will specialise in real ales, as well as craft and world beers, serving a wide range of different draught ales, as well as bottled beers, including those from local and regional brewers.

It will be open for family dining, with children, accompanied by an adult, welcome in the pub up until 9pm, throughout the week.

The new-look pub features one bar, on the ground floor customer level, with a feature double height backbar.

A large first-floor roof external terrace, accessed via summer doors through the first-floor bar, has a partially covered pergola and retractable sun awning, as well as semi covered booth seating.  It offers distance views all over Carlow.

Historical photos, details of local history, information relating to events, historical buildings and characters of the area, as well as feature artwork by local artists are all on display.

Manager, Damien McConomy, said: "Myself and my team are looking forward to welcoming customers into the pub and we are confident that it will be a great addition to the Carlow community."

The company already runs five pubs in the Republic of Ireland; The Three Tun Tavern in Carysfort Avenue, Blackrock, The Forty Foot in The Pavilion Centre, Marine Road, Dun Laoghaire, The Great Wood at Westend Shopping Park, Blanchardstown, The Old Borough in Main Street, Swords, as well as The Linen Weaver in Paul Street, Plaza, Cork.