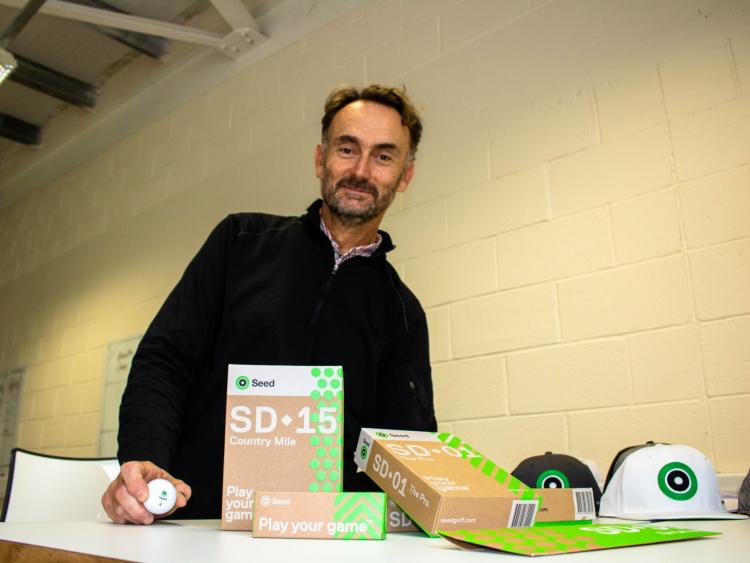 An Institute of Technology Carlow spin-out company, Seed Golf, is soaring to success, having developed a tour-performance golf ball that is quietly revolutionising the way people buy their golf equipment.

In just 18 months, Seed has been named the official golf ball of the PGA EuroPro Tour with sales in 31 countries, including Australia, Russia, South Korea and the Middle East.

Based at the Enterprise & Research Incubation Campus (ERIC) at Institute of Technology Carlow, Seed Golf is the brainchild of Australian Dean Klatt who conceived the idea behind Seed Golf when playing a round of golf with a friend at Princes Golf Club in England.

Klatt’s friend disappeared into the pro shop midway through his round and bought a dozen Top Flite balls, a brand known for its durability and its cheapness, explaining, “losing expensive golf balls isn’t fun”.

However, high costs are one of the main reasons people were leaving golf and Klatt saw the opportunity for a high-performance value golf ball that could be purchased online, and without the added distribution costs and expensive celebrity endorsements.

Golf balls must meet the stringent performance regulations laid down by the Royal and Ancient (R&A) and the United States Golf Association (USGA) who govern the rules of the sport.

The evolution of the ball has moved from leather to the current components of space age plastics, silicone and advanced rubber and, more recently, the emergence of a four and five-piece ball.

Klatt signed up for the New Frontiers Entrepreneurial Development Programme at Institute of Technology Carlow and worked closely with its Programme Manager Peadar Casey and the Institute’s multi-disciplinary team in developing his business.

"We’ve access to all the talent here in IT Carlow such as the engCORE and designCORE teams. The Carlow campus has a wind tunnel, a product development lab with 3D printers and such; that is what first attracted us here and we have never left.

"We’ve also been part of the Presidents Research Scheme and had Masters students work on design projects like an innovative new golf bag," said Dean Klatt.

"The resources here in IT Carlow have subsequently assisted Dean in scaling his business in line with his global ambition. SEED Golf is a good example of the type of business which we want to attract as part of our ongoing development of a regional entrepreneurial ecosystem", said Peadar Casey, New Frontiers Programme Manager at IT Carlow.

Seed Golf’s first ball - the SD-01 –was produced in July 2017, targeting amateur players. Growth was based on a strong social media campaign, using Instagram and YouTube.

South Korea recently became the 31st country in the company’s reach with all sales conducted solely online via seedgolf.com.

Today, Seed Golf has a range of four golf balls and a tie-up with the PGA EuroPro Tour where it is the official golf ball.

"They liked the idea we were a start-up brand, new to the market, as their players are new to the pro ranks and very similar to start-ups themselves. It’s been a great relationship and helped both sides grow and develop," said Klatt.

Seed Golf has plans to join the ranks of big players such as Titleist, Callaway, TaylorMade, Srixon and Callaway who, collectively, are responsible for the almost 1.2 billion golf balls manufactured globally each year.

"People may have scoffed at the idea of a world-class golf ball from Carlow but the combination of performance and value has made it possible. Ireland has an amazing history around the game of golf, and golfers have really responded to Seed story," added Klatt.