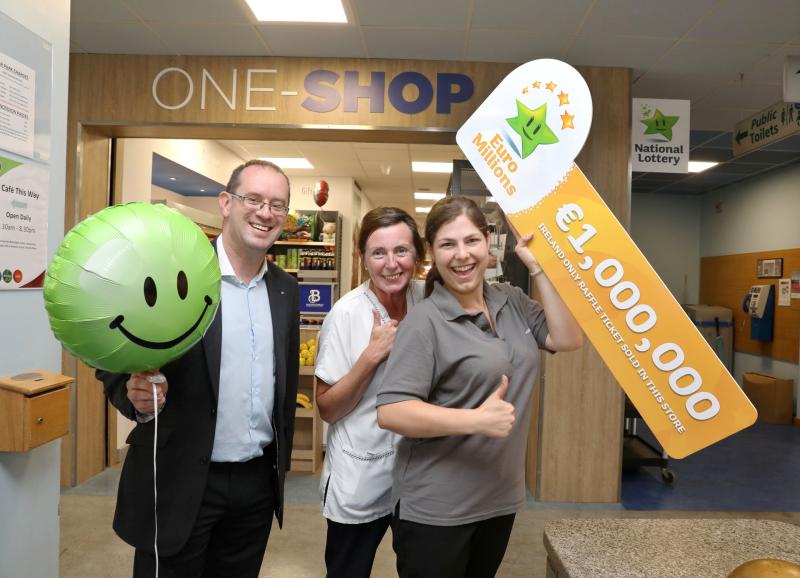 Staff at the shop in Waterford Hospital

It was a bank holiday weekend to remember for a lucky South East family syndicate who claimed a €1,005,000 prize from Friday’s EuroMillions ‘Ireland Only Raffle’ on a ticket bought in a hospital shop when they were visiting a sick friend.

The unsuspecting family spent most of the weekend thinking they had won €5,000 - only to discover that they had in fact won an additional €1 million!

The players bought their golden ticket at the Aramark store at the University Hospital in Waterford while visiting a family friend.

When the EuroMillions results came through on Friday night, the family were delighted when they thought they had won €5,000 and celebrated over the weekend.

A family spokesperson said: “We checked the results online over the weekend and our EuroMillions raffle number was listed as one of the €5,000 winners.

"We were just absolutely thrilled with that and little did we know that there was an extra €1 million on top of that again. When I mentioned to one of the kids that I had bought the ticket at the hospital in Waterford, they said the winning one million Euro “Ireland Only Raffle” ticket was sold there."

They added: "There was an unbelievable scramble to find out if we were the lucky winner of the extra €1 million prize. We haven’t been to sleep all weekend with the excitement and to get the confirmation from the National Lottery this morning was a huge relief.”

The winner insisted that they would not be getting carried away with their win and careful planning would need to be done before spending their EuroMillions windfall.

“Well we’ve only really believed we have had this big win today (Tuesday) when we had it confirmed so we haven’t had any time to think about what we’re going to do."

"Each of the members of the syndicate will get an equal share so I know there is a couple of mortgages to pay off before they start any celebratory spending. We are an incredibly close family and I couldn’t think of anything better in the world than to win with them as a group,” they added.

This was the fourth EuroMillions Draw ‘Ireland Only Raffle’ in 2018 in which one player in Ireland was guaranteed to win €1 million. Previous winners in 2018 have come from Dublin, Waterford and Galway.