Were you affected by the cancellation, is so, email: news@carlowlive.ie 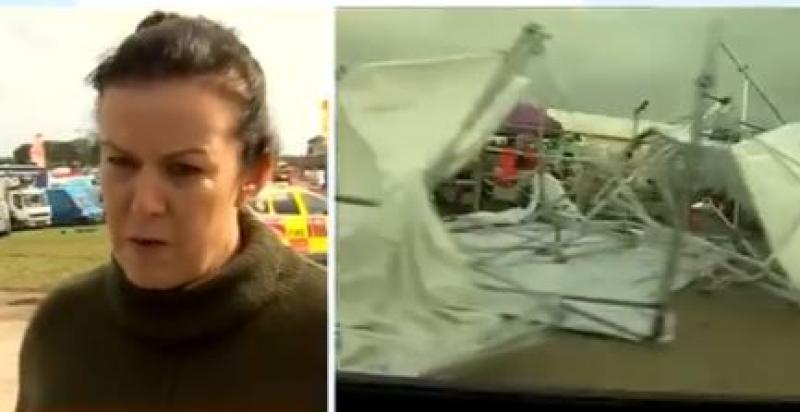 The cancellation of day two of the National Ploughing Championships was forced by 'an act of God' according to the assistant managing director of the Ploughing.

"We don't want to make any rash decisions we can't hold up.

"It was an act of God. We are very sorry to the public," she said.

Ms McHugh added that they hope to have a decision on whether they will open the Ploughing on Friday in time for the main evening news on Wednesday.

Speaking to RTE news Ms McHugh said they were confident the day would go ahead until around ten o'clock on Wednesday morning.

"I think we made the only call that could be made on the situation.

"We have had huge consultation over the last 24 hours with Met Eireann, with the fire services, with the gardai and all the emergency services and we have worked through the night on assessments. The assessment that Met Eireann did last night at about eight o’clock, they were very confident that they highs of the wind were coming in between eight and ten [this morning].

"We had our morning review from their checks around the country at seven o’clock, it was a more positive directive than last night even so we were all very confident again because it wouldn’t be just NPA that would have the say all the emergency services would be involved.

"The Chief Superintendent came to our site office coming up to our 10 o’clock meeting and he said it is looking different," she said.

"We are reviewing that there is a lot of people to consult and consider primarily the exhibitors would have to be considered, what their reaction would be to an extra day and then after that we would have to have all the services, the biggest group would be the gardai, we would have to have the order of Malta because we certainly will not be opening unless we are able to provide full services to the public and that is why we are not opening to the public today because it just wasn’t a safe place as you can see."

"Even when we called off the event at 11:30 am we were very confident that we would be allowing exhibitors in to start doing remedial work and this stage and it is still not accessible," she said.

The NPA would like to thank exhibitors & the public for your patience and understanding re. today's site closure following consultations and on the safety advice of the Gardai, Offaly Emergency Services and Met Eireann
Exhibitors will be kept updated with direct contact via email