The biggest benefit is in energy saving 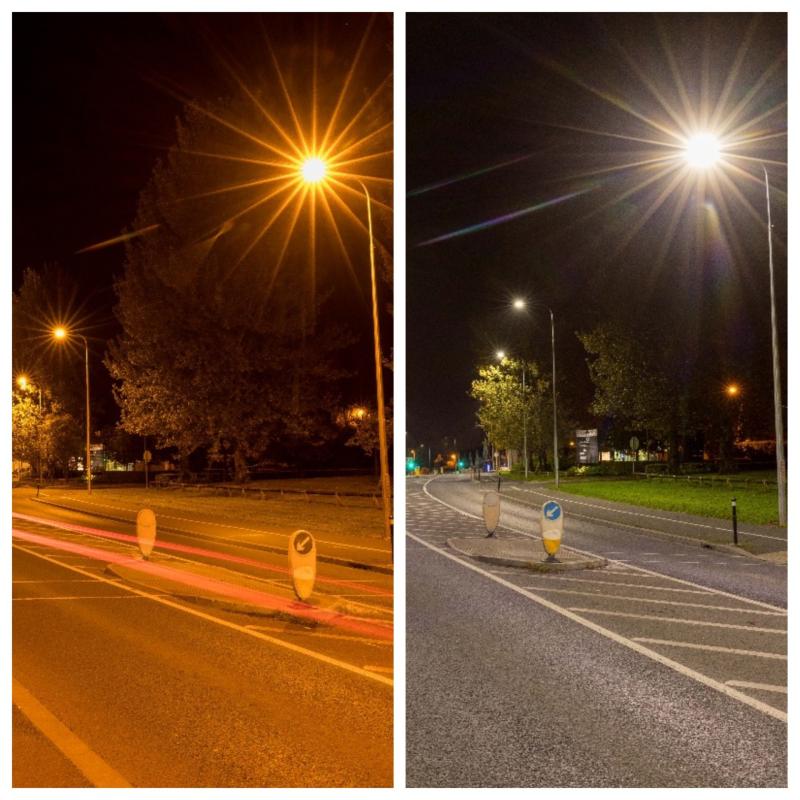 Before and after: The top shows the former orange lighting on the Old Dublin Road, while the bottom images shows the new LED lighting

A councillor has raised concerns from residents who contacted him about the "brightness" of the new LED lights in their residential areas as Carlow County Council installs over 1,000 of them across the county.

Read also: Residents in Tinnahinch would need to be able to play 'hopscotch' to walk on pavements

Cllr Michael Doran said that "in some residential areas they do seem to be too bright" and he asked if there were others that could be got, however he confirmed he was not talking about the LED lights on public thoroughfares.

Cllr Fintan Phelan said the Council were leading the way on the enhancement of public lighting and that "a lot of the old lights were very dark" and upgrades recently in the Pollerton area seem to be working very well.

The lighting upgrade on the N80 through Carlow Town is now complete.

Meanwhile Cllr Will Paton said there had been "some difficulties" with LED lights but the majority of issues have been resolved.

Director of Services at Carlow County Council, Dan McInerney, said the lights are brighter and more concentrated but the biggest benefit is in energy saving.

Funding from the Sustainable Energy Authority of Ireland meant 1,100 LED lights were installed as part of Phase 1 of the project at a cost of €250,000.

The SEAI have also indicated that there will grant-aid available for the similar replacement of existing lights by lower energy LED lights in 2019.

A futher application will be submitted next year.

He said there had been approximately 13 complaints from people which included issues over the lights shining through a bedroom window.

Mr McInerney said the Council had endeavoured to resolve the issues and can do so by putting shades at the back of the light.