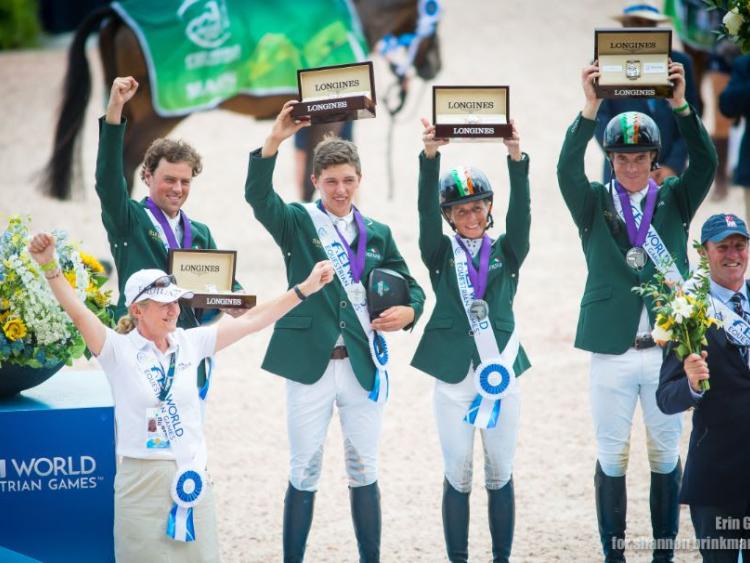 Carlow's Sam Watson returns to international competition this weekend just over three weeks after returning from the World Equestrian Games in North Carolina, USA, where he won silver medal on the Irish Eventing team.

The Nurney native will compete in the final Nations Cup of the season at Boekelo in The Netherlands.

Sam and Meath’s Sarah Ennis have been named with two of their younger horses, as team manager Sally Corscadden begins the task of building a large pool of horses and riders to choose from, with an eye on the Tokyo Olympics in 2020 following Ireland’s successful qualification at the World Championships.

Speaking ahead of Boekelo, Sally Corscadden said: “We are really looking forward to the Boekelo Nations Cup competition as it is always a great event with the top nations involved.

"Our target is to be on the podium again and we are in the lucky position to have two of our World Equestrian Games silver medalists – Sarah Ennis and Sam Watson, available with their younger horses.

"It is a perfect opportunity to include new combinations to experience riding on a team in a long format event. Meabh Bolger will make her Nations Cup debut with Killossery Athletic Touch (ISH) and Brian Morrison will be on his Millstreet mount Milchem JJ," she added.

Sam arrives in Boekelo boosted by the news that his World Equestrian Games silver medal win has seen him rise into the top 10 on the Eventing World Rankings.

Team and individual silver medal winner Padraig McCarthy has moved up to No.17, while Galway’s Cathal Daniels in now at No.22. Sarah Ennis meanwhile has climbed a massive 79 places and now sits at No.35

Boekelo Nations Cup is expected to attract over 60,000 spectators and gets underway this Thursday with the first of two days of Dressage.