Prehistoric giant Irish elk antlers and skull to make up to €20,000 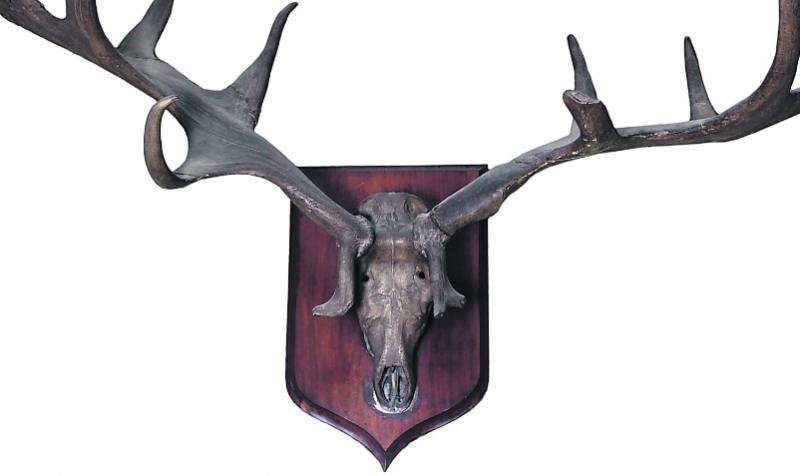 Prehistoric giant Irish elk antlers and skull from milford House, Carlow to make up to €20,000 at auction

A number of fascinating and extremely important pieces go up for auction when Fonsie Mealy Auctioneers, Castlecomer conduct the first ever contents sale of Milford House, Carlow in the Talbot hotel, Carlow on November 20.

Read also: Three-bedroom house on Granby Row in Carlow Town available to rent for €1,100 a month

Heirlooms belonging to the Alexander family acquired through the centuries will go under the hammer.

The highlight of the taxidermy collection is an important set of prehistoric giant Irish elk antlers and skull, dating from 12000 - 8000 BC which are approximately 2.26 metres long.

The front hall contains a fine quality Irish Chippendale period breakfront Bookcase, which is expected to make between €7000 and €9000.

There are over 100 pieces of family silver up for auction including many crested pieces.

An important 19th Century engraved Presentation Trowel inscribed “Presented by the Dean and Chapter of St Patrick’s Cathedral Dublin to Messrs Murphy & Son, in acknowledgement of the skill and fidelity with which they have extended the restoration of the Cathedral through the munificence of Benjamin Lee Guinness Esquire 1865", hallmarked, in original case ( €1,500 – €2,000). A spear belonging to the last king of the Zulus is valued at €1,500.

Speaking about the auction, George Fonsie Mealy, Director, Fonsie Mealy Auctioneers, said: "It is a privilege to be involved in such a prestigious contents sale which is being offered to the market for the first time, and in the closing chapter of the Alexander Family and Milford House in Carlow History."

The auction will be held at the Talbot Hotel, Portlaoise Road, Carlow on Tuesday, November 20 at 10.30am.