'Well that was enjoyable!' Padraig Amond reacts to knocking Leicester City out of FA Cup

A David and Goliath story! 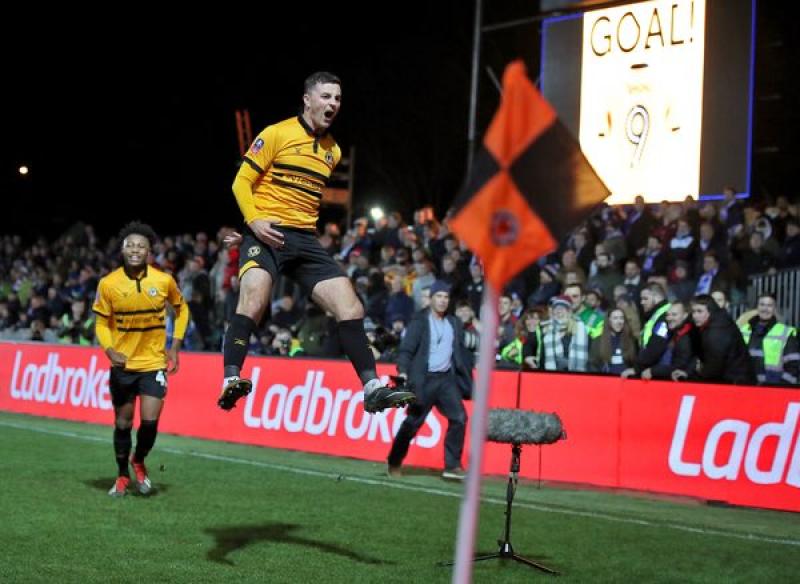 Carlow's Padraig Amond has tweeted his delight after his crucial penalty stunned Leicester City at the weekend with an FA Cup third round giantkilling victory for his League Two side.

Read also: WATCH: Carlow man knocks Leicester City out of the FA Cup with cracker of a penalty

Carlow-born striker Padraig Amond was the hero for Newport County on Sunday afternoon, as the outfit rocked the footballing world and Leicester City with a 2-1 win.

With five minutes left, Newport were awarded a penalty after Leicester’s Marc Albrighton raised his arm to block a cross into the box and 30-year-old Amond made no mistake from the spot.

On Monday, he took to social media to express his delight for his Welsh club.

Well that was enjoyable!! What a performance by everyone today. Lucky to play with an unbelievable bunch of lads ⚫️ https://t.co/2NpZTSKd30

Amond has no doubt who he wants to play in the fourth round, speaking to the Irish Independent, he said: "I want Man United away, and I think the chairman wants them as well - the biggest team, the biggest crowd he can get.

"I'm a Shamrock Rovers from Ireland, but the team in England I always looked up to and wanted to do well or play for was Man United.

"It would be a dream to go to Old Trafford, but whoever it is it doesn't makes a difference.

"No one will fancy coming here and playing us because of the banana skin of it all. Hopefully there is a big one there for us."

The drinks were also flowing in Amond's local bar in Carlow, where his mother and father as well his fiancee's parents had gathered to watch the game.

Last year, Tully's Bar had offered every customer a free drink if Amond scored in the fourth round against Tottenham and it was the same again this time around.