Revealed! The two people through to the FINAL of Carlow's All Time Greats competition 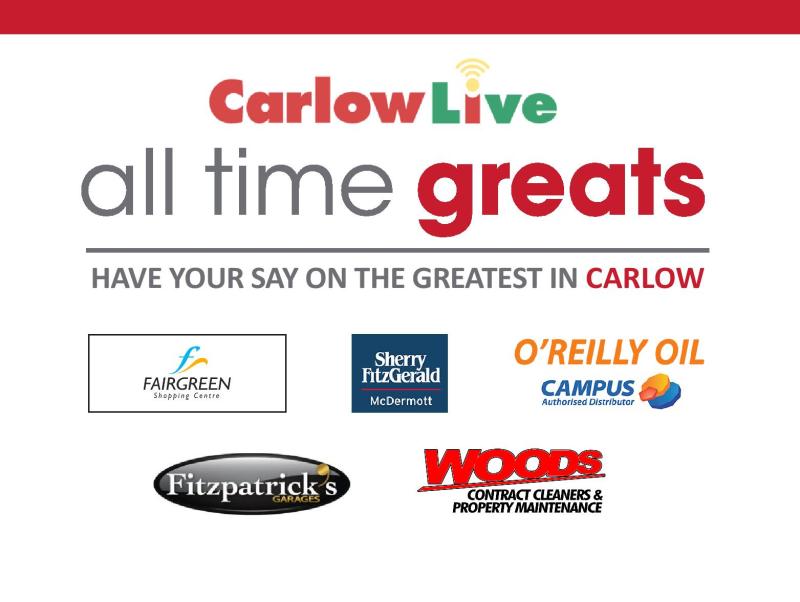 Who is in the FINAL of Carlow's All Time Greats? Read on...

As we head into the FINAL of the competition - two deserving candidates remain in contention for the title of Carlow's All Time Great.

First of all, a huge thank you to our sponsors, Fairgreen Shopping Centre; Fitzpatrick's Garages; O'Reilly Oil; Sherry Fitzgerald McDermott and Woods Contract Cleaners and Maintenance.

The semi-finals saw two candidates blow past their opposition with an incredible show of support from the public in Carlow.

Kevin Brady pulled in a remarkable 85% of the vote against Carlow Senior Football Manager, Turlough O'Brien, who managed 15%.

While in the second semi-final, Carlow sprinter Molly Scott secured 80% of the vote while Kevin Barry only managed 20%.

So, now we're down to our final two candidates after hundreds of nominations for Carlow's All Time Great.

The first finalist, Kevin Brady, has helped put Carlow on the map from a tourism perspective. He plays a key role in the St Patrick's Day Festival and had the vision to set up the hugely successful, Scarefest.

Kevin lives and breathes Carlow and will be tough to beat as he deservedly takes his place in the final two.

The second finalist, Molly Scott, has grabbed national headlines for her endeavours in athletics after she won a silver medal for her country in the 4x100m relay at the World U20 Championships in Finland last year.

The Hacketstown native and IT Carlow student - who boasts many other achievements - runs with the St Laurence O'Toole Athletics Club. She is a very worthy finalist in the competition.

Thanks to everyone who voted so far - you can now vote on the final pairing in the Carlow All Time Greats Section.