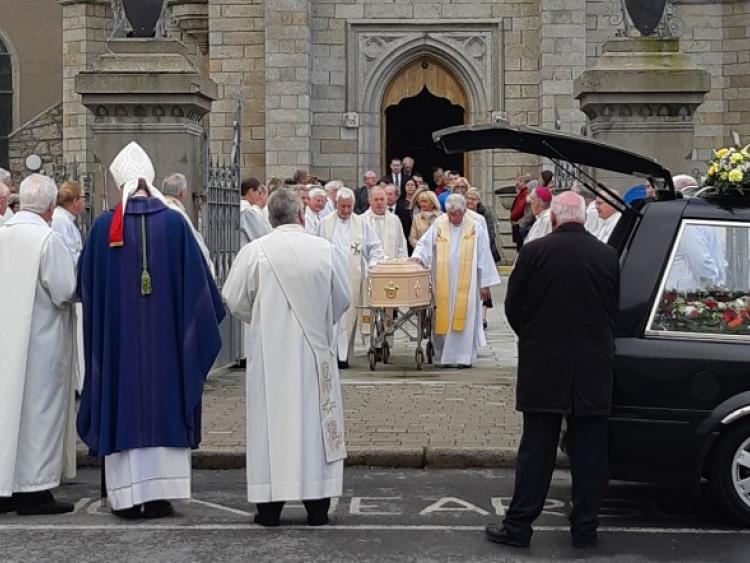 Fr Pierce Murphy's remains on the way out of St Andrew's Church, Bagenalstown on Monday afternoon

Bishop Denis Nulty of the Kildare and Leighlin Diocese has paid tribute to the "trailblazer" Fr Pierce Murphy as the popular priest was laid to rest on Monday afternoon.

Fr Murphy, a long serving priest in the Diocese - spent time in Clonegal and Bagenalstown in the 1960s and 1990s - and passed away in the Blackrock Clinic, in Dublin, last Thursday night.

He has been described as a priest who loved each parish he served in and had "enduring friendships in every one".

In delivering his eulogy to Fr Murphy at St Andrew's Church in Bagenalstown, Bishop Nulty began by saying it had been a "lonely" couple of weeks for the Diocese with the death of Fr John Cummins recently and now another great priest had passed on.

Bishop Nulty said: "Pierce was, in essence, a bridge builder. He always found the way around things no matter how complex or complicated.

"He was someone from Dublin who rooted himself into the heart of Kildare and Leighlin. He loved each parish and had enduring friendships in every one.

"He was a trailblazer," the Bishop said, and Fr Murphy labelled himself a "floating curate" as well as being a published author and keen photographer.

A Dublin native, Fr Murphy was educated in Knockbeg and Maynooth College and ordained for the Diocese 1966.

He was curate in Monasterevin until 1992 and transferred to Prosperous from 1992-1996. Appointed to Muinebheag in Carlow July 1996.

In 2006 he stepped down from administration duties as parish priest of Bagenalstown to assume a unique role then, as a "floating curate" to the Borris Deanery.

The hundreds gathered heard how Fr Murphy believed in children and had a brilliant way of explaining things to them with a "great way of thinking outside the box".

"He loved to keep things simple, so simple that a child could understand and comprehend, it was the teacher in him," Bishop Nulty said.

Fr Murphy was described as a great friend, who loved helping people.

"Whatever will be, will be," Bishop Nulty said were the words of Fr Murphy on the Tuesday before he died.

He put value in being "being present with people, present in schools, in clubs, in parish halls, for Pierce being present was key", the Bishop said and told mourners how he loved sweets and desserts.

"Pierce was never without friends, we can be confident that the Lord was with him as he slipped into eternity," Bishop Nulty concluded.

Gifts brought up during the Funeral Mass included a camera which portrayed Fr Murphy's love of photography; photos were given as a symbol of his love of travel and desire to visit friends and family all over the world.

Fr Murphy's watch was also brought up as a reminder of his love of precision and attention to detail.

He once told his aunt that he would be arriving on the bus at 11.05pm approximately, a detail which was met with laughs by the mourners.

May he rest in peace.