Carlow is among the coldest areas in the country 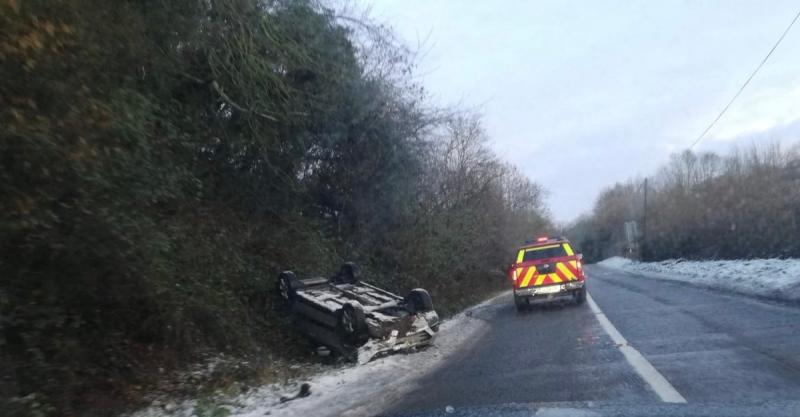 A crash near Arles in Laois (CREDIT: Carlow Weather)

It's a frosty, icy start with some snow lying and also some mist and fog especially in southern areas.

On Monday, Met Éireann says the frost, ice and fog will clear gradually and many places will be bright with sunny spells.

However some rain and hail showers will develop later in the morning and early afternoon, some of these will be heavy or of hail and possibly some wintry on hills.

Afternoon temperatures of 6 or 7 degrees Celsius in moderate west to southwest winds.

Cold on Monday night with occasional showers in northern counties, but showers will be well scattered in southern parts of the province with clear periods. Lows of 1 to 3 degrees Celsius and frost in places.

According to www.carlowweather.com, it is -0.8c at Alan O'Reilly's station after a low of -1.5c but temperatures slowly increasing now as cloud and rain moves in from the West.

"The TII data shows some roads in Eastern areas below 0c with reports of icy conditions including at the road works on the M7," he added.

Ranging from 1c to 8c on the 7am update from @MetEireann with rain pushing in from the west. Road temps remain below 0c in some areas with icy roads. This photo of a crash was taken near Arles in Laois this morning. Take it easy out there. pic.twitter.com/JH3glXsnEq

Gardaí have issued the following advice:

• It takes longer to stop a vehicle in snow or on icy roads so slow down and allow extra distance between you and the vehicle in front.
• Keep a sharp lookout for pedestrians, cyclists and other vulnerable road users.
• Keep your windows clear of snow during your journey.
• Manoeuvre gently; avoid harsh braking, acceleration or steering as these can induce a skid.
• Use the highest gear possible to reduce the engine revs as this will help avoid wheel spin.
• When travelling downhill, especially through a series of bends, select a low gear as early as possible and allow your speed to reduce using the brake pedal gently.