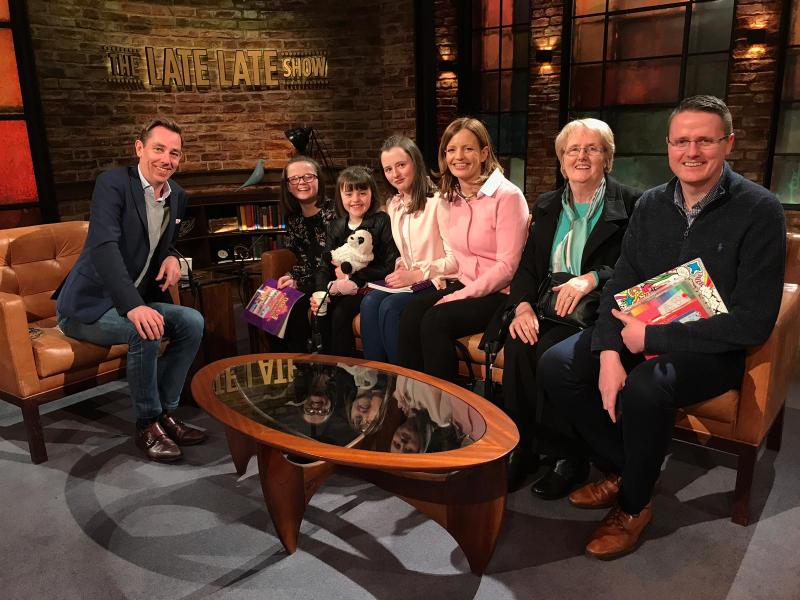 Keeva, her sisters Sarah and Jane, parents Maurita and Eric and grandmother Grania meeting Ryan Tubridy before the show

The very talented writer from Ballycarney appeared on RTÉ's flagship show recently and her father, Eric, said: "Since Keeva's appearance on the Late Late Show, there has been another €10,000 in book sales in Dunnes Stores bringing the total raised for Cliona's Foundation to €50,000."

Keeva came up with the idea of the book two years ago while on family holiday and in the space of an afternoon had the title and contents nearly completed.

The book centres on an 8-year-old girl who finds herself in hospital and her sister brings her in letters of complaint from her dolls at home, who miss her terribly.

Eric added: "However, the best thing to come from the night was that Ryan Tubridy and The Late Late Show raised further awareness of Cliona's Foundation which was fantastic.

"Cliona's Foundation receive no Government funding and currently rely purely on donations and fundraisers. The charity provides financial support to families with a seriously sick child around the country by helping them with non-medical expenses. Sadly there are new families for them to help every month.

"Hopefully the book will go on and sell out in Dunnes Stores which would be a dream come true."