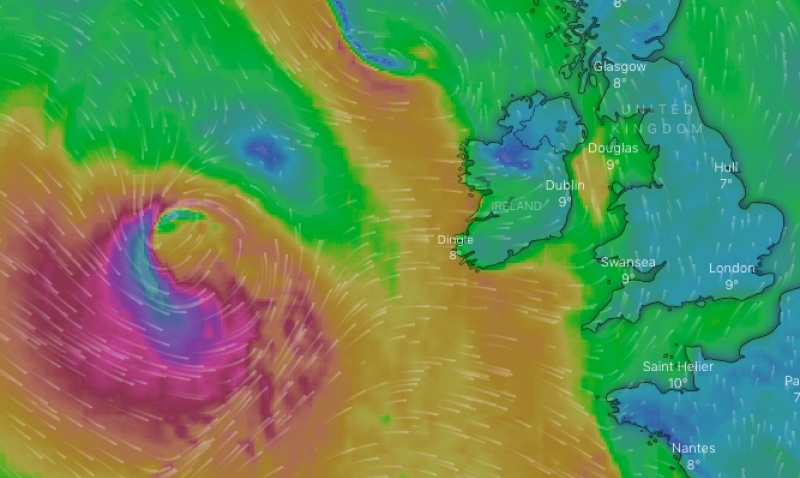 Two Status Orange weather warnings and one Yellow warning are now in place across the country with Carlow covered by the Status Yellow warning.

Met Éireann forecasters put out a second Status Orange warning at 4am on Friday morning for parts of the country with wind gusts of up to 120-130kmh expected.

A Status Orange wind warning has been issued for Clare, Cork, Kerry and Limerick from 4pm Friday until 5am on Saturday.

The second Status Orange warning, issued Friday, is a wind warning for Tipperary and Waterford from 10pm on Friday until 2am Saturday. 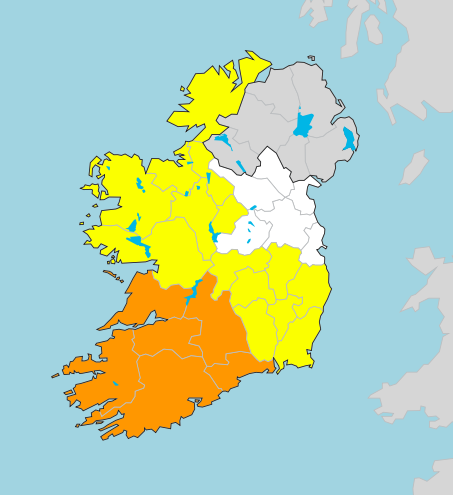 Storm Hannah will bring winds up to 130km/h and heavy widespread rain according to Thursday night's weather forecast from Met Éireann.

In her forecast after the RTÉ News, meteorologist Michelle Dillon gave the latest on the storm. She forecast that winds of up to 130km would hit with Cork, Kerry Limerick and Clare worst impacted.

The first sign of the storm will be rain in the early afternoon that will become widespread as the storm barrels in.

She warned that this would be followed by "severe and damaging" gusts of storm force winds particularly in coastal parts from Friday evening.

Damp and mostly cloudy this morning with scattered outbreaks of rain, but some dry periods also. A spell of more persistent rain will start to extend from the southwest by this afternoon. Winds will increase over southern and western parts of the country from late afternoon, with severe and damaging gusts developing in the southwest of the country as Storm Hannah approaches. Cooler than of late, with highs of 8 to 12 degrees.

Strong to gale force and gusty northwesterly winds in Munster, Connacht and south Leinster at first tonight, with severe and damaging gusts in west Munster and along the south coast. Becoming windy countrywide overnight but the most severe and damaging winds will gradually ease as the night goes on. Outbreaks of rain will continue tonight, with some heavy bursts, but the rain will gradually break up into showers and clear spells in the west and southwest overnight. Lows of 3 to 6 degrees.

A windy start to tomorrow Saturday with fresh to strong and gusty northwesterly winds. Remaining rain in the east and north will clear by early afternoon, with sunny spells and scattered showers in west and south extending countrywide. The showers will become increasingly isolated towards evening as northwest winds gradually moderate. Cool, with highs of 8 to 12 degrees.

Saturday night: Mainly dry with clear spells at first, but cloud will gradually thicken from the southwest and patchy light rain and drizzle will devlop in parts of Munster and Connacht overnight. Lows of 2 to 7 degrees, coldest in Ulster where clear spells will persist the longest. Mist and fog patches will form in the mainly light breezes.

Sunday: Sunday will be a mainly cloudy and misty day with patchy light rain and drizzle. Some limited brighter intervals are possible towards evening. It will be a little milder than recent days, with highs of 11 to 16 degrees, coolest along the east coast. Light southeast or variable breezes.

Monday: Monday will be a mainly cloudy day with occasional rain or showers, but some limited brighter intervals could occur in parts of the east and north. Rain will become persistent in the west later in the day, extending eastwards over the country on Monday night. Top temperatures 12 to 16 degrees in moderate southeasterly breezes.

Tuesday: Present indications for Tuesday suggest a wet start to the day in many places, but drier and brighter weather will gradually extend from the southwest as the day goes on. Top temperatures will be around 11 to 14 degrees with winds veering westerly.

National traffic: Storm Hannah plans to visit Clare, Cork, Kerry and Limerick this Friday evening and overnight. Please take care on roads as high winds are forecast in many areas. Plan your journey in advance and allow plenty of time to travel. #StaySafe #ArriveAlive pic.twitter.com/wun5NSkwoY