UPDATED: 'Love is in the air,' Fine Gael and Fianna Fáil enter new coalition for Carlow

Councillors herald the end of civil war politics in Carlow 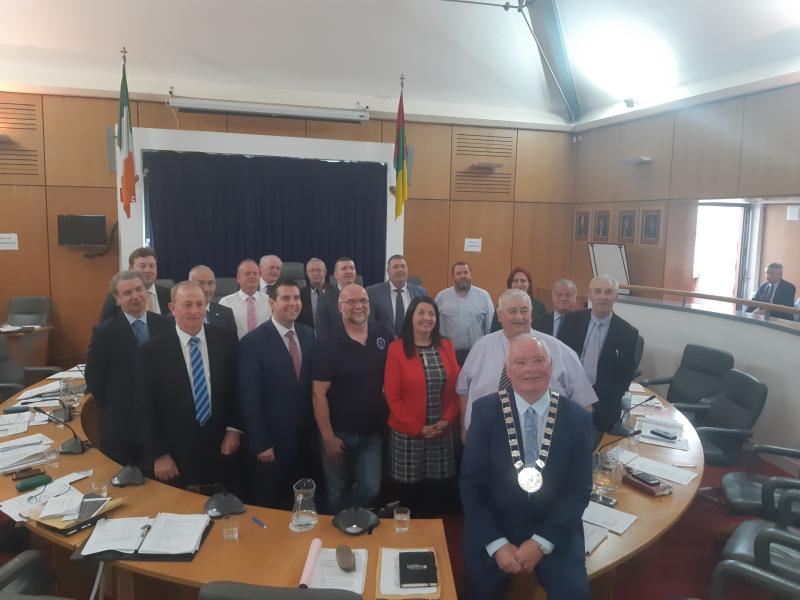 Carlow County Council's new Cathaoirleach is Fianna Fáil's John Pender after he was elected on Friday afternoon at the annual meeting of the local authority as Fianna Fáil and Fine Gael entered into a coalition.

Cllr Fintan Phelan proposed Cllr Pender who said the Tullow councillor had served the people of Carlow with distinction and it would be a great honour for his colleague to be elected as chair.

The proposal was seconded by Cllr Andrea Dalton.

As the chains were handed over, Cllr Pender said: "Today is my 35th AGM, I had a very long apprenticeship. I'm absolutely delighted. I'm a bit overawed by the occasion."

Meanwhile, it was revealed on Friday that the 12 elected members of Fianna Fáil (6) and Fine Gael (6) have reached an historic agreement in Carlow following talks involving all parties and Independents since the local elections on May 24.

Speaking about the election, Cllr Pender wished the newly elected candidates well and he added: "We lost two fine colleagues in Denis Foley and Jim Deane."

Cllr Will Paton said the role of chair had been "a dream" of Cllr Pender's for so long as the father of the house and his family - who were in the public gallery - were bursting with pride.

Cllr Arthur McDonald was elected as Leas Cathaoirleach - he was proposed by Cllr Phelan and it was seconded by Cllr Dalton.

"I thought I'd never see it in my time, that Fianna Fáil would have the chair and vice chair of Carlow County Council," as Cllr McDonald said he was glad that a deal had been made with Fine Gael.

The outgoing Cathaoirleach, Cllr Brian O'Donoghue, said his year as chair was a huge honour for him and he paid tribute to the Council staff and the local authority's chief executive, Kathleen Holohan, for their work and help throughout the year.

Both Fine Gael and Fianna Fáil had indicated that it was likely that discussions would take place between them as they are the two biggest groups on Carlow County Council.

The parties attempted to form other coalitions throughout the last two weeks but despite "well meaning and sincere negotiations", the required majority could not be reached.

In a statement on Friday afternoon, ahead of the first meeting of the new Council, the parties issued a statement.

It said: "There are many opportunities and challenges facing Carlow, ranging from housing, economic development, community enhancement, infrastructural and planning issues.

"The coalition will focus on seizing the opportunities and reforming the challenging areas with the aim of improving the lives of the citizens of Carlow.

"The elected members of Fine Gael and Fianna Fáil will meet periodically to ensure the progression of key priorities within the Council. These group meetings will be chaired alternatively by respective group leaders.

"The 18 elected councillors have a duty to the county of Carlow and its citizens to ensure the stability and reform of the local authority.

"This will be the driving principle of the Fianna Fáil and Fine Gael coalition."