This is a huge issue 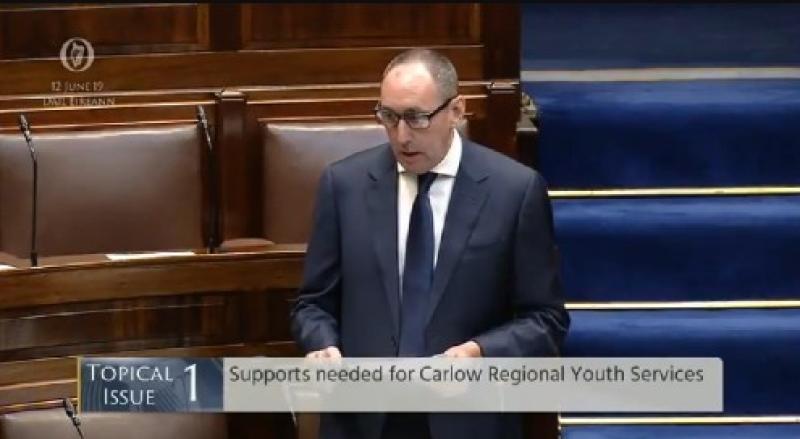 The new childcare plan has been raised in the Dáil over the threat it poses to Carlow Regional Youth Services.

CRYS has described as "outrageous" plans for the proposed new childcare plan which they say will close down three after-school programmes within its voluntary organisation.

If the Government's proposed new National Childcare Scheme continues in its current format parents will be required to pay €40 per child per week if they are successful in securing hours, it has been claimed.

Fine Gael TD Pat Deering has raised the issue with Minister for Children Katherine Zappone in the Dáil this week.

He said: "The new childcare scheme is being rolled out on October 11. While it is welcome in general, it is missing a key element.

"Its roll-out is concerned with job activation. While that is welcome, the heart of the programme overlooks vulnerable children.

"They are vulnerable in different ways. For example, there could be drug related or other issues that have a knock-on effect.

"These kids need to be given the same opportunity as everyone else, including us in our time, to progress from primary level education to second and third level education.

"If the new scheme is implemented as presented, however, such kids will miss out on that opportunity.

"I am sure that Carlow Town is like other towns in that it has many such children. They need to be given the same opportunity as everyone else."

He added: "Will the Minister re-examine the scheme's format? She is engaged in an ongoing review. Unfortunately, the people involved in the CRYS are disappointed about not being asked to make a contribution to that review."

In response, Minister Zappone said: "My understanding is that during April and May of this year, the Carlow County Childcare Committee gathered data on the potential impact of the national childcare scheme on early learning and care and school-age services in County Carlow.

"Departmental officials will meet some of those involved in the Carlow pilot impact study on June 13 to learn more about their work and their findings.

"When those officials feed into our work, we will have a deeper understanding of what is going on with the shift in financial support for these children, as described by the Deputy, and we will seek to find a way to move forward to ensure the service is sustainable.

"I think the first step in this regard will involve meeting the officials to hear at first hand about the findings of the work that is being presented and moving forward from there. We will take those steps and see where we are then."