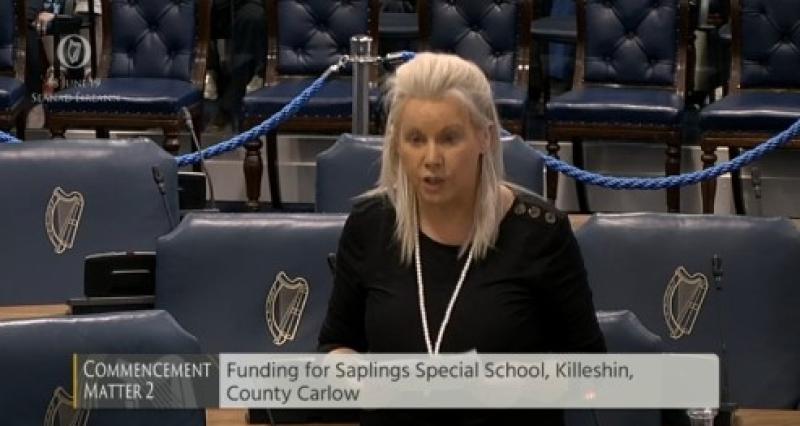 Senator Jennifer Murnane O'Connor speaking in the Seanad on Tuesday

The matter was raised in the Seanad on Tuesday by Senator Jennifer Murnane O'Connor.

Speaking directly to the Minister for Education, Joe McHugh, she said: "The insurance premium for Saplings special school in Carlow had sky-rocketed from €3,000 to €10,500. Last week, the premium increased again to €13,500.

"The school has incredible staff, a passionate principal and terrific parents, and the parish and wider community are very supportive.

"Each fundraiser, however, dips into the same pot. The annual capitation grant of €20,000 to run the school seems incredible when, just last month, it received an insurance bill of €13,500 and a utility bill for one month alone was more than €4,000.

"The school has no choice but to constantly fundraise to maintain the services it provides so well. It is one thing for parents to feel frustrated that they cannot give the best to their children, but for a principal and staff to feel they are facing into a grim future under extreme financial pressure is simply soul destroying.

"Saplings special school caters for children from the age of four to 18. This model of school was first established by a small group of parents and professionals in the Kildare area because there was a need for the service; it did not exist elsewhere.

"Saplings now has five schools located around the country providing quality education for pupils with autism and complex needs.

"Each school offers a range of child-centred autism-specific education that draws on a range of evidence-based interventions.

"In Carlow in 2007, a group of parents came together to set up a school in their community. It began with 12 pupils. It will have 30 in September.

"In 2010, it became a Department of Education and Skills special school and was granted temporary recognition as a primary school by the Department in 2011.

"With regard to capital plans for the future, only when a school has permanent recognition can it apply for capital funding provided by the taxpayer.

"The school received such recognition in September 2016. The Department has to examine how it can support these schools, their staff, and the children and their families with regard to funding.

"I ask that the school be assisted in securing a permanent building. It currently rents accommodation with the help of the parish of Graiguecullen and Killeshin, which straddles the Carlow-Laois border.

"The 32 staff in the special school, including support staff, are highly trained and highly skilled. If they had proper funding, they could be supportive and excel in their areas of expertise.

"Saplings provides speech and language and occupational therapy through a private company, the costs of which are met through fundraising. It does not receive supports such as these centrally from the HSE, despite needing them.

"That is another problem; it gets no support from the HSE. Saplings is sometimes called the last resort for many families whose children's needs cannot be met in autism spectrum disorder, ASD, units.

"While attending Saplings the children get the opportunity to reach their potential and, in some cases, eventually move to a mainstream setting.

"The model of education in the school uses evidence-based interventions and behavioural analysis to provide individual education and behaviour support plans for each pupil.

"Each pupil has his or her own analysis. There is always a plan and this helps explain the frustration staff feel when financial threats are looming as these plans become tenuous and uncertain.

"Members of the school's board of management work voluntarily and none of them wishes to see this kind of financial pressure on the school, its staff, and the parents.

"The Department of Education and Skills' special education section needs to step in and figure something out for Saplings special school Carlow and similar schools throughout the country. Some 15 schools contacted the Department with their concerns last week.

"The National Association of Boards of Management in Special Education commissioned a report on increasing costs and recommended that a group scheme be established for the schools in question.

"Something can be done here and I look forward to hearing the Minister's response regarding the supports available to schools such as Saplings special school Carlow.

"This is very important. I have also met the Minister of State, Deputy McGrath, several times but I ask that all relevant Ministers and Ministers of State work together.

"We need to keep these schools. We cannot lose the likes of Saplings and other schools across the country because of increasing insurance costs. It is just not acceptable."

In response, Minister McHugh said: "We have made progress over the last period in discussions with the National Association of Boards of Management in Special Education.

"The Department of Education and Skills is working as a matter of urgency with relevant Departments, including the Department of Public Expenditure and Reform, and with the State Claims Agency to seek a resolution to the issue of increased insurance costs in special schools.

"A number of options have been identified to address the issue. These include the development of a group insurance scheme for special schools.

"The National Association of Boards of Management in Special Education is engaging with its member boards of management in this regard.

"A meeting of the boards and patrons took place on 6 June to discuss the matter and the options available. This meeting was attended by an official from the Department.

"The group scheme proposal appears to be the most viable option at this stage. The importance of all schools signing up for such a scheme was emphasised at the recent meeting.

"All school representatives who were in attendance were in favour of exploring the group scheme option. Although the Department of Education and Skills has advanced school capitation payments on an exceptional basis to a small number of schools that recently experienced difficulty in paying insurance premiums, it is not sustainable for the Department to continue to advance capitation payments as a way of meeting vastly increased insurance premiums.

"I know this is a cause of concern for schools as well. Officials from the Department have been in contact with Saplings special school in Carlow on this matter.

"Representatives of the school have been briefed on the situation. I hope a speedy and cost-effective resolution can be secured for impacted special schools."