Andrea is an inspiration! 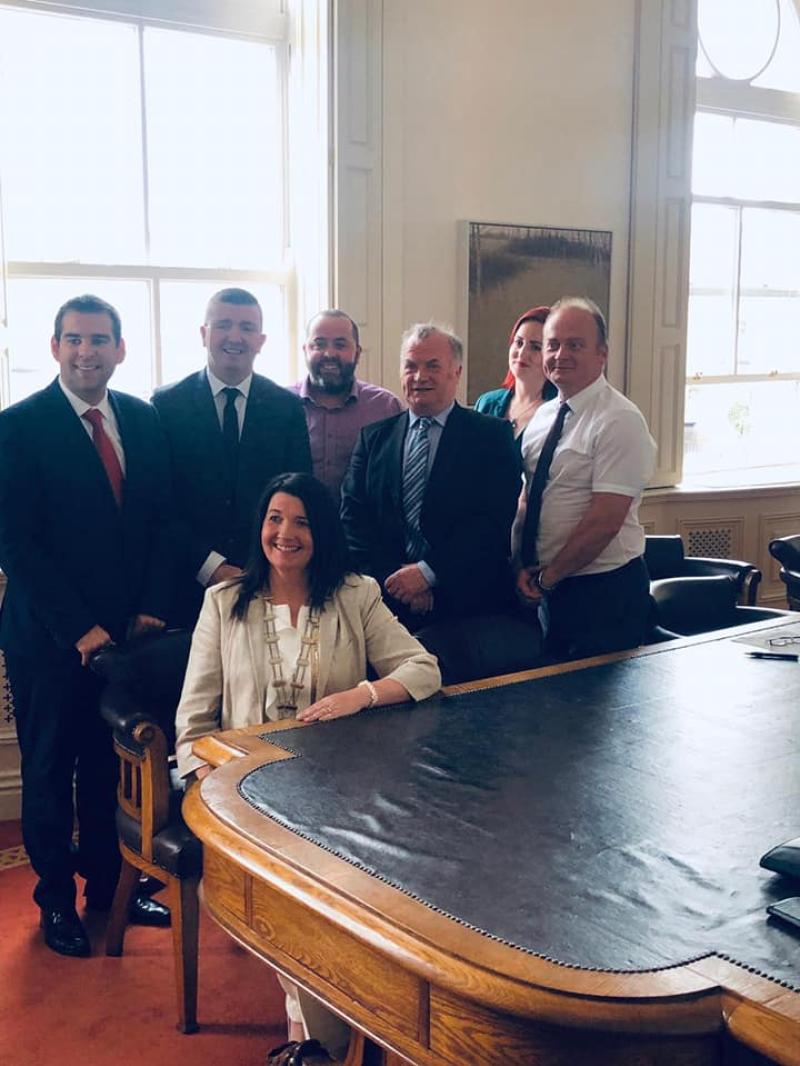 Read also: 'She will do an excellent job,' Andrea Dalton elected as Carlow's first female Mayor

She said: "Today is an historic day as it is the first time a female has been elected to the position of Mayor in Carlow.

"In June 1939, just 60 years ago Kathleen Clarke, Lord Mayor of Dublin was the first women ever elected as a Lord Mayor in Ireland.

"She was the widow of Tom Clarke and sister of Edward Daly both of whom were executed in 1916.

"On election, she refused to wear the Lord Mayor’s chain as it had been presented to the city by William of Orange. I promised I won’t be that awkward today."

Her full speech is below:

"Thank you I am very proud, honoured and privileged to be elected Mayor today continuing a long and distinguished family tradition of public service. My cousin Anne Ahern nee Long served nearly 3 terms as a County Councillor before resigning in 2018 and her father, my Uncle Eamonn Long served 2 terms in the 70s/80s

Thank you to Fintan and Ken for nominating and seconding me and to my colleagues for supporting my election.

I would also like to add my personal congratulations to Ken on a job well done last year. One of the highlight of his year has to be the work he time and commitment he put into ensuring Carlow had the best St Patrick’s Day ever.

I wouldn’t be here without out the people of Carlow who voted for me on May 24th. So thank you to each and every one of them for putting their trust in me and giving me the opportunity to represent them. .

A very special thanks to my friends and family who make up the A Team (The Andrea Team). They have been with me on every step of the way in this campaign. There are too many to mention by name, however I hope each and every one of you know how much I appreciate your love, support and encouragement. I wouldn’t be here today without it!

I am particularly honoured to have my parents Jim and Eileen here with me today. They have made me who I am today by instilling in my values – of working to make a difference, of standing up for what you believe in, a strong work ethic and a sense of respect and consideration for others.

A great welcome also to my children Ross and Sophie who were only delighted to get a few hours off school to attend today. They do a great job in keeping me grounded and are also a constant reminder that my number one role is that of their Mammy! I know they are very proud of me even if I do embarrass them from time to time!

A special mention to my husband Sean without whose love, encouragement, support and housework I would be able to do what I do. He has just recently retired after 36 years as a secondary school teacher, 35 of which were spent in Presentation College Carlow. I wish him a long, healthy and happy retirement and I hope he enjoys his new role as full-time house husband!

Today is an historic day as it is the first time a female has been elected to the position of Mayor in Carlow. In June 1939, just 60 years ago Kathleen Clarke, Lord Mayor of Dublin was the first women ever elected as a Lord Mayor in Ireland. She was the widow of Tom Clarke and sister of Edward Daly both of whom were executed in 1916. On election, she refused to wear the Lord Mayor’s chain as it had been presented to the city by William of Orange. I promised I won’t be that awkward today.

In sport, it is said ‘If she can’t see it, she can’t be it!’. The same can be said in politics. So hopefully seeing me elected as Mayor today will inspire other women to put themselves forward for election. So today I am throwing down the gauntlet to the many wonderful women I know working throughout this County in community, voluntary and paid positions to start now for Election 2024. Look for the reasons why you should run in the next election and overcome the reasons that make you think you shouldn’t. This year we have doubled the female representation from 5% to 10%, let’s aim to at least double it again in 2024. The national average is currently 24%. Maybe we could go all the way and achieve what Dun Laoghaire/Rathdown have done this year in becoming the first council with 50/50 percent male/female representation. Carlow’s population is split 50%/50% male/female. In fact I think there might be a couple of hundred more females! There is no reason the composition of the County Council shouldn’t reflect this.

I am truly honoured to be elected Mayor of Carlow – a town and County that I love and that I am so proud of. I believe as the second smallest county we punch way above our weight despite, in my opinion, a severe lack of central government funding.

The key themes of my Mayorship will be Positivity, Inclusivity, and Sustainability. I promise I will use my office of Mayor to highlight the many positives and potentials this town and Municipal District has to offer and will represent its people in a positive, inclusive and respectful way.

We are the 13th largest town in the country and have so much to offer. Blessed to have 2 excellent 3rd level institutions. Carlow College St Patrick’s being the oldest Catholic university in Ireland and the 2nd oldest after Trinity. The IT is also soon to be part of the Technological University of the South East and is at the forefront in designing courses that are needed by our local and national industries. We are the Engineering capital of Ireland and proud home to many excellent industries like MSD and Netwatch, Keenans, Burnside, Delmec to name but a few.

We, as elected members must also acknowledge and tackle they challenges we faces, in particular, the need for social and affordable housing, the need for a women’s refuge and the need to regenerate our town centre. We especially need to tackle dereliction and bring such sites – residential and business - back into use.

We must also aspire to make Carlow the greenest county in Ireland. Leading by example, to show we are taking climate change seriously, we should do so while ensuring the wellbeing of our communities and citizens. A wellbeing vision for Carlow is currently being developed and I would encourage everyone to take park.

Fianna Fail believes in an Ireland for All, as Mayor I would like to ensure that our town and County is a Carlow for All where every citizen has a right to be fully included and treated with respect and dignity regardless of race, religion, gender, ethnicity, ability, sexuality or age.

We, need to work together to get the message out there that Carlow is a great vibrant place to live in, to work in, to do business in and to visit.

Thank you once again for this honour, I promise I will work to the best of my ability to carry out my duties with honesty, integrity, positivity and energy.

I am delighted now to have the organisers of Carlow’s first Pride Festival here to present to us today."