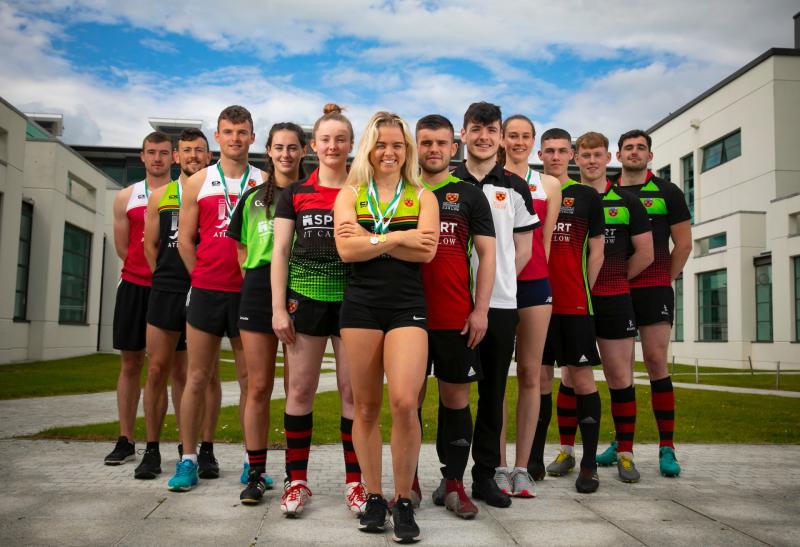 Institute of Technology Carlow ranked second overall out of a total of 31 third-level universities and institutes of technology at the recent Student Sport Ireland (SSI) Sports College of the Year Awards.

IT Carlow was the highest-ranking institute of technology, with only Dublin City University finishing marginally ahead.

Pictured above are a selection of IT Carlow athletes who tasted individual and team success while representing the Institute during the 2018/2019 academic year.

Launched in 2018, the Sports College of the Year Competition rewards colleges for their participation and achievement in all cups, leagues and competitions run by the organisation.

Student Sport Ireland is an umbrella organisation and the governing body for third-level sport in educational establishments across the island of Ireland.

Of the 35 competitions Student Sport Ireland organised throughout the academic year – that include Badminton, Rugby, Volleyball, Netball, Karting, Olympic Handball and Pool - Institute of Technology Carlow was successful in winning the SSI’s Men’s Rugby, Division 1 League, the Brendan Johnston Cup and the O’Boyle Shield.

Strong performances resulting in high-placed finishes in Womens Rugby, Pool and Karting, as well as high levels of participation in Men’s and Women’s Volleyball and Badminton, ensured the Institute topped the leader board for the duration of the academic year.

A strong sporting finish by DCU at the final event of the year, however, allowed them to establish themselves as the front runner.

"Participation in sport and physical activity, whether at performance, competitive or recreational level plays a key role in improving student health and wellbeing, while also enhancing the learner experience.

"We congratulate DCU on their sporting success this year, which saw them rank 1stoverall and we look forward to continuing to challenge the top universities and institutes of technology by providing further opportunities for our students to excel and prosper in pursuit of their life and sporting goals."

Dr Patricia Mulcahy, President of Institute of Technology Carlow commented on the achievement and said: "This ranking reflects the commitment by IT Carlow to providing outstanding sports facilities and opportunities for its student body.

"I congratulate students and our sporting faculty on this achievement.

"It comes at a time when we will shortly complete Phase 1 of our €15million, 31-acre South Sports Campus that will ensure Institute of Technology Carlow is the higher education institution of choice for students wishing to combine their academic study while participating at performance, competitive or recreational level in their chosen sports."