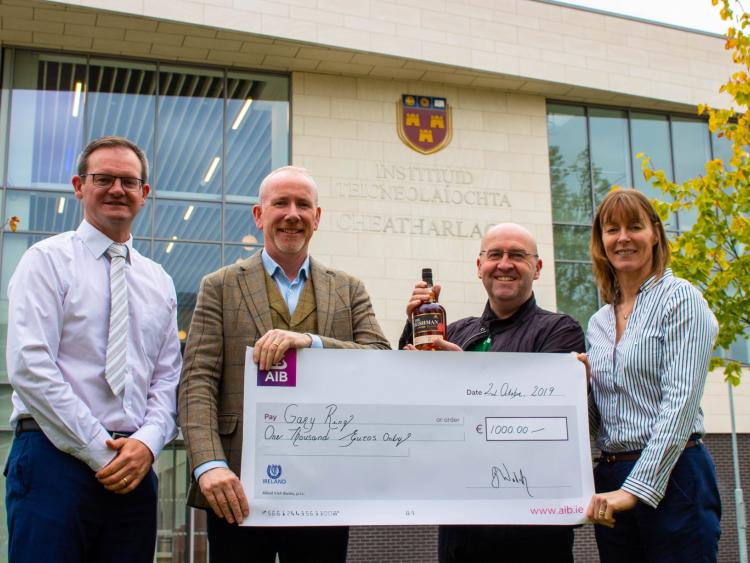 Gary Ring, from Douglas in Cork city and a second year student on Ireland’s first honours degree course in brewing and distilling at IT Carlow, has been awarded the Walsh Whiskey €1,000 bursary prize for achieving the highest grades in first year.

A mature student, Gary worked for many years as a wine buyer for Musgrave’s Supervalu and Centra franchises, and most recently the Barry Group that owns the CarryOut and Costcutter brands, which led to a curiosity about the production side of the drinks industry.

"I'm thrilled to be the recipient of this bursary. From working in wholesaling, I developed a real interest in the production and manufacturing side of things but I couldn’t take it any further because there was no compelling degree course in Ireland in this area at the time course.

"When I heard about the launch of the BSc in Brewing and Distilling in Institute of Technology Carlow, I just went for it," said Gary.

"The course is fantastic and, as the class sizes are relatively small, we all help one another. I spent the summer working with an excellent malt company, Loughran Family Malt, in Dundalk, as a direct result of being on the course.

"The course content is so varied and we cover a lot. It is challenging but then it should be; it is a serious degree with international recognition.

"I’m finding the agronomy and malting side of things very interesting at the moment and there is huge support from the course director Dr David Ryan who has such a global ambition and outlook for this degree, it's inspiring." he said.

"I'd encourage anyone in Leaving Cert to give the degree serious consideration. This is an excellent honours science degree course and brewing and distilling has a very exciting future.

"Much of what we study, such as fermentation, has applications in the food and biofuel sectors to name just two," added Gary.

In 2017, Walsh Whiskey announced an annual €1,000 bursary prize to the Brewing and Distilling student who achieved the highest grades at the end of his or her first year.

The bursary, according to Bernard Walsh, Founder and Managing Director of Walsh Whiskey, recognises Institute of Technology Carlow as "a centre for teaching, learning, research and innovation in brewing and distilling".

Bernard Walsh, Founder and Managing Director of Walsh Whiskey said: "We are delighted to recognise Gary’s exceptional achievement through this bursary.

"Walsh Whiskey aligns very well to the Brewing & Distilling Degree at Institute of Technology Carlow in that we both aim to make world-class contributions to the re-emerging and growing sector that is Irish whiskey.

"Our Writers’ Tears and The Irishman whiskeys are on the market over 13 years now and they will need world-class distillers of the future, like Gary, to ensure they remain the super-premium whiskeys that they are."

"Now in its third year, many of our students are preparing to undertake their work based experiential learning module at some of Irelands 30 plus distilleries and over 140 breweries.

"Our graduates will support the industry in the region, nationally and globally and this bursary from Walsh Whiskey inspires first year students to get off to the best possible start in their studies."

Launched in 2017, the four-year Bachelor of Science (Hons) programme in Brewing and Distilling was developed by Institute of Technology Carlow following significant research and consultation with industry, representative organisations, national bodies and government.

The programme has received huge support from industry that has consistently reported difficulties in recruiting suitable qualified staff.

The programme is one of only four in the world to achieve professional recognition by the prestigious Institute of Brewing and Distilling (IBD), the world’s leading professional body for the brewing and distilling industry.

Graduates of the degree will be eligible to sit the Masters level professional qualifications of the IBD.