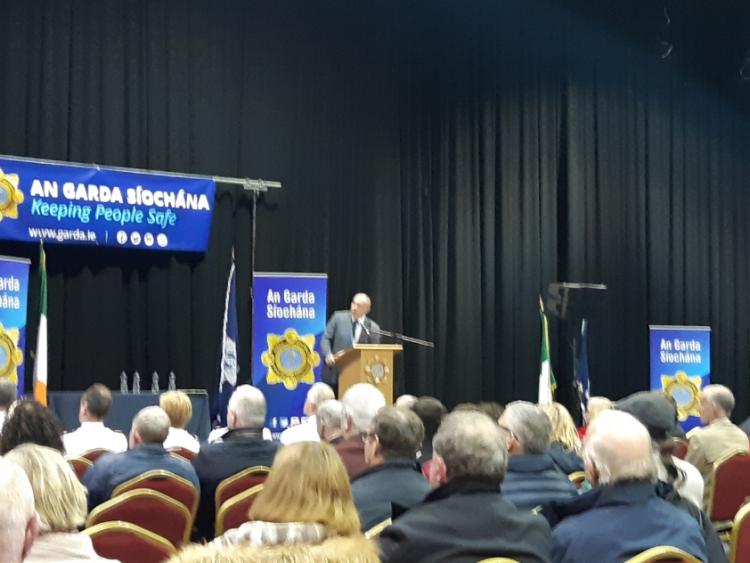 Hundreds turned out for the Kilkenny/Carlow Community and Text Alert Awards 2019 in Cillín Hill on Monday night.

Several local groups and individuals were recognised for working to keep their communities safe and giving up their time to establish text alerts in their area and build the groups.

Speaking at the event, Mr Finn said there is "a great sense of pride in terms of both counties and the pride in looking after each other".

"There is great community support and community spirit driven by Chief Superintendent [of the Garda Division] Dominic Hayes," he added.

"We are stronger together. This evening we are welcoming over 850 new pairs of eyes," through new text alerts in both counties, Mr Finn said.

These include text alert groups on the Burrin Road/Springfield Road, Pollerton in Carlow and a revamped Carlow Town text alert and the new groups were recognised on the night and received awards.

"It is about acknowledging all of the good work," he added.

There are 23 groups in Carlow District with in excess of 8,000 members.

Among those to receive an award in 2019 from Carlow were:

Andrea Dalton, Chairperson of the Carlow Text Alert Group and she oversaw and aided its expansion

Joe Butler, Graiguecullen Community Alert who has help to increase take up of the service

William Burgess, Chairman of the Rathvilly Community Group and he has been involved for almost 30 years

Superintendent of the Carlow Division, Aiden Brennan, said: "I want to give a word of thanks to Sgt Conor Egan and the Community Policing unit, they do great work.

"If you're from Tullow, watch out. Text alert is coming."

In one Carlow text alert success story a local resident realised the culprit of a robbery in Pollerton had run through his yard after an alert went out of the incident and his information helped Gardaí to track and catch the suspect.

He also asked for a quick show of hands for anyone who had gotten a dodgy call in recent weeks and the majority of the room raised their hands.

"They're scams folks," and he warned people not to give them any information.

Sgt McConnon also told the congregation of a person who called into Carlow Garda Station with a family member recently who had been scammed out of quite a bit of money in a phone scam.

He advised people to lock garages, keep tools and ladders secured and to keep cash in the Post Office or the bank and "not at home".

"Leave the lights on at home," he said and he also stressed the value of "good neighbours" who are on alert.

In his closing address, Chief Supt Dominic Hayes said: "The work we do wouldn't be possible without your help.

"It is great to see crime reduced and it has reduced dramatically.

"Good neighbours is such an important piece.

"It is a team effort, there's a huge bond between us. We have something special."

He also praised the volunteerism of local people in both counties.