The county has received 8 groups from China in 2019 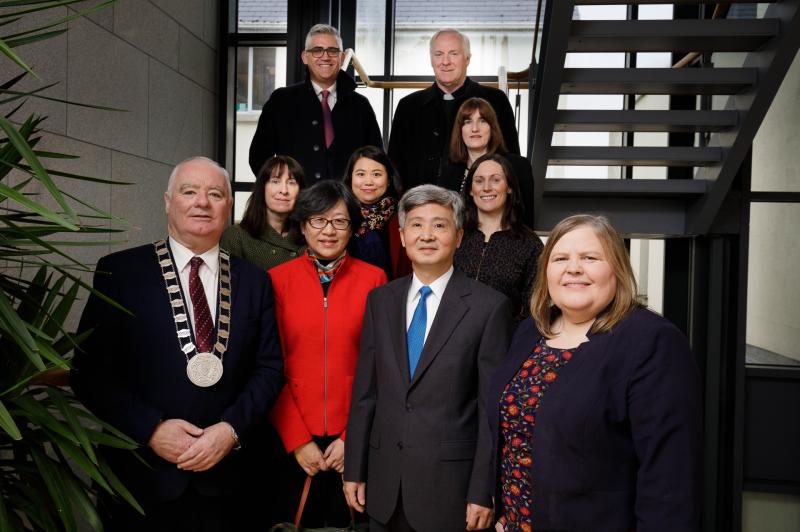 Carlow is progressing links with China to develop economic and educational opportunities with eight groups from China visiting the Dolmen County this year.

Ambassador He Xiangdong, Ambassador for China in Ireland was welcomed to a meeting with Carlow County Council by the Cathaoirleach, Cllr John Pender and Chief Executive, Kathleen Holohan and representatives of IT Carlow and Carlow College this week.

During the meeting an exchange of educational and economic opportunities were discussed which was followed by a Tour of VISUAL.

While greeting the delegation in the Council Chamber, Cllr Pender said: "I am delighted to further develop and enrich the friendship between China and its people and the people of County Carlow."

He described to the delegation the beauty of Carlow and the endless opportunities it presented to those who live, work and visit the county.

Addressing the meeting, Ambassador Xiangdong said he was greatly honoured to visit Carlow.

Speaking during his visit, Ambassador He Xiangdong outlined China's tremendous achievements in its economic and social development and confirmed that China will continue to be a major driver for the global economy.

The Ambassador highlighted that a '"deep and strong friendship" has been forged between our two countries and peoples and he looks forward to supporting the development of the relationship with County Carlow.

Speaking about the visit Chief Executive of Carlow County Council, Kathleen Holohan said: "One of Carlow County Council’s functions under its community and economic development activities is the establishment and development of international links which showcase County Carlow as an ideal place to live, visit and work and the delegation’s visit once again provided us with the opportunity to develop relationships which build the foundations for projects for the future.

"County Carlow has already significant links with China in particular from an  educational and economic viewpoint and we will continue to support this agenda.

"In 2019, we have received 8 groups from China interested in exploring economic, cultural and educational links which included the development of a friendship agreement with the province of Hunan."