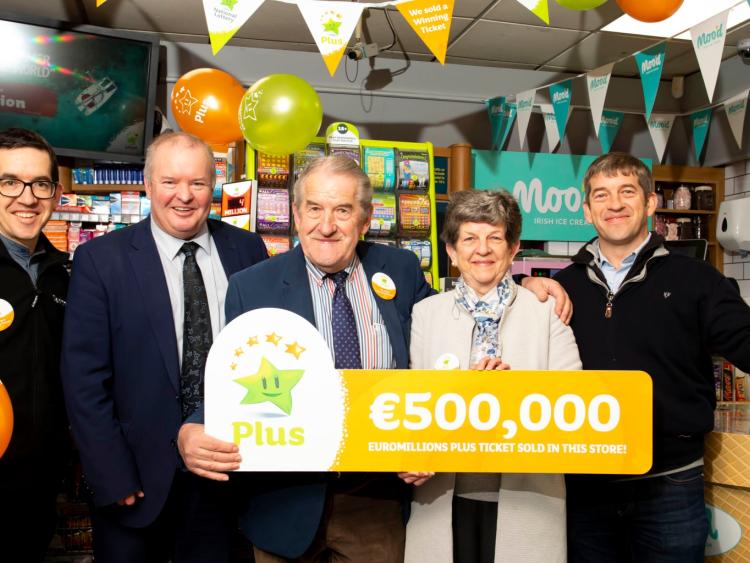 There were joyous scenes for a lucky Kilkenny family in the National Lottery winners' room in Dublin city centre as they gathered to celebrate their mother’s €500,000 windfall after she won the EuroMillions Plus top prize on November 12.

Read also: GALLERY: Check out the pictures after shop sells €700,000 worth of winning Lotto tickets

The delighted Kilkenny woman, who wishes to keep her win private, was only passing through Carlow last week when she decided to stop off at a local garage and try her luck by buying a EuroMillions ticket.

She bought her lucky ticket, which netted her a cool half a million euro, at O'Toole's Service Station in Tullow - and the shop had only sold a winning €200,000 scratch card prize just days before.

She said: "It’s one of my little traditions, I’ll always buy a lottery ticket when I’m out of town but this is just unbelievable.

So far in 2019, there have been 28 winners of the €500,000 EuroMillion Plus top prize in Ireland. 2019 could be a record breaking year for top prizes won in the EuroMillions Plus game in Ireland.

The dedicated Kilkenny mother says that she plans to use her new found fortune to help her adult children get on the property ladder but also hinted that she will enjoy her win with a nice sun holiday and some home renovations.

"You never know how you are going to react when you win a prize like that but the very first thought that came into my head was that I would be able to help my children.

"It is every mother’s dream to be able to help out your children as they fly the nest and now, this is something I will be able to do.

"I’m going to meet with my bank manager in the next few days and get him to write up a cheque for each of them and it’ll set them up very nicely for the future," she said.

She added: "It won’t be all about the family though! We’re going to have to enjoy the win ourselves and we’re looking at a nice sun holiday before Christmas to get away from this dreary weather!

"After that, we might look at getting some home improvements done with a new kitchen if we have any money left over."