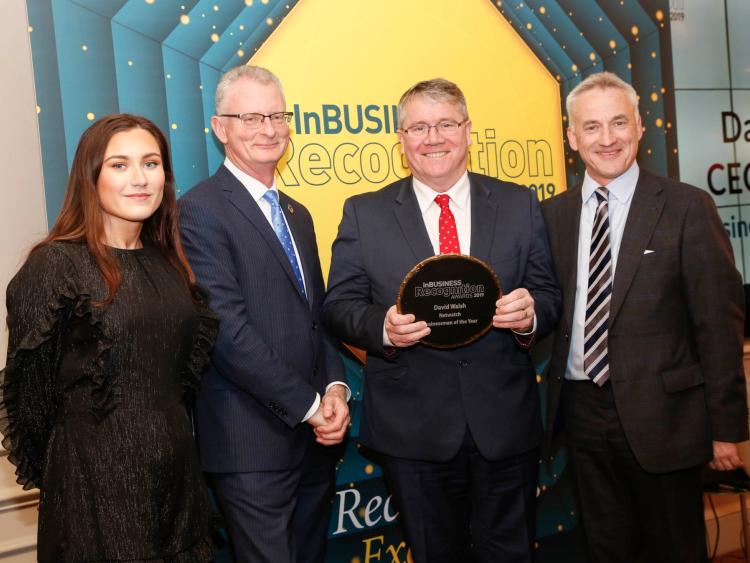 Carlow’s David Walsh has been named Business Man of the Year at the InBUSINESS Recognition Awards, presented by InBUSINESS the official publication of Chambers Ireland, Ireland’s largest business organisation.

The InBUSINESS Recognition Awards aim to honour and celebrate success, achievement and ambition within Irish business and to acknowledge and appreciate the contributions of individuals to grow business in this country.

A native of Kerry, David graduated from UCD, with a Bachelor of Agricultural Science. On graduation he joined a UCD start-up Ovamass Ltd before moving to Carlow to join Keenan, an Irish company which is one of the world’s leading feed technology companies.

David joined the Keenan team in 1989 and rose through the ranks from sales executive to regional sales manager to group sales manager to Market Director before his departure in 2002 to establish Netwatch.

Netwatch were the first company to introduce proactive video monitoring in Ireland and led a quiet revolution in the Irish Security sector.

Prior to the company’s establishment in 2003, security offerings were a static CCTV recording that could be played back after the crime had taken place or manned security - which was very expensive and an option for only very large companies.

Introducing proactive video monitoring was a game changer in the security industry and set a new bar for excellence.

Under David’s stewardship Netwatch invested heavily in R&D and developed a suite of software solutions that enables the company to win large complex projects on the global stage.

The Group’s integration of Machine Learning and AI within its security systems is revolutionising the real time visual monitoring segment of the security industry and positioning Netwatch Group for further global growth.

David’s ambition “from Day 1 when we set up Netwatch, was to establish a global company headquartered in Carlow”.

“Growing up in Kerry, I saw the impact of Kerry Group, a small co-op in Listowel transforming into one of the world’s leading nutritional companies.

"I want Netwatch Group to have that same impact for Carlow, for our employees and their families.  Over 80% of our Irish employees are local to Carlow and the South East. That is hugely significant.  We’re proving that you don’t have to be based in the capital city to build a global company”, he says.

David announced in August that he will step down as CEO at the end of 2019 and will move to the Board of Directors as a founder and major shareholder and will focus his time on the future strategy and expansion of the international group.

“The large-scale growth opportunities will take us to the US but the Irish market is key to our continued success.

"We have a loyal customer base, an established team and it makes me very proud to see the Irish market grow year on year for Netwatch”, he says.

“I am delighted to accept this InBUSINESS Business Man of the Year Award and I accept it on behalf of all of my colleagues in Netwatch.  The past 17 years have been an incredible journey and it has been fantastic to share it with so many people here in Carlow”, he added.

He was instrumental in the launch of the Junior Entrepreneur Programme in Carlow schools.

He served as President of County Carlow Chamber of Commerce for two years and his contribution to Carlow was recognised with his being awarded Carlow Ambassador of the Year in 2014.