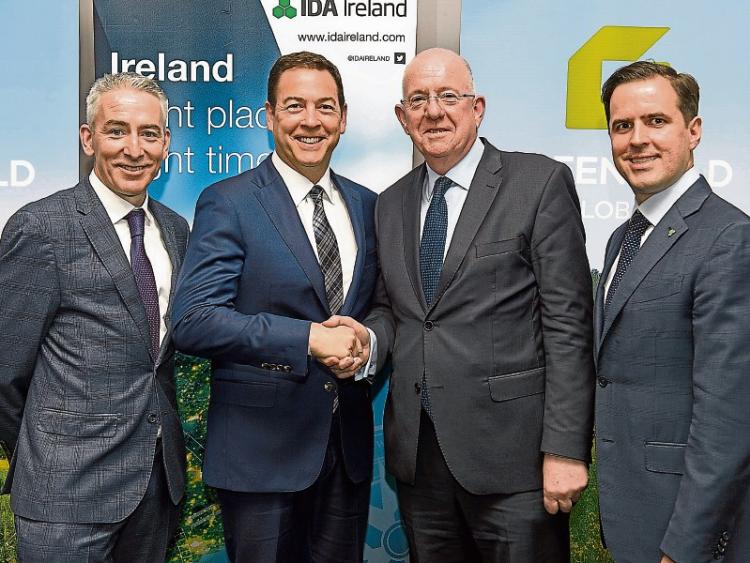 Laois beat off more than 30 other locations for a €30 million investment by life sciences Canadian company, Greenfield Global which plans to open its first European base in Portlaoise next year.

The project will also deliver 100 jobs in the construction phase to the Laois county town.

The company made its announcement at the Midlands Park Hotel in April.

It also said that a further 75 jobs will be created in what the company terms its first phase of operation in Ireland and Europe.

“We are delighted to be here,” Mr Howard Field, Greenfield Global President and CEO, told the Leinster Express at the announcement in the Midlands Park Hotel.

The company has planning permission from Laois County Council to build at the Industrial Development Authority (IDA) Business and Technology Park off the town's Mountrath Road.

“In this first project we will be investing almost €30 million,” he revealed of the initiative which is backed by the IDA.

He said Laois was chosen, after “hundreds of hours of work” because of its location close to the customer base in Ireland. Greenfield supplies raw material used by many of the big pharmaceutical and biotech companies, such as Pfizer. It has been supplying from outside Ireland for a number of years.

“Because we are here in the Midlands we will be able to reach all corners of Ireland where the life sciences companies are located,” he said.

Mr Field said the company will be supplying alcohol and speciality solvents which he described as the building blocks required by pharmaceutical companies to make medicines and other products.

“Without us, those drugs don't get made,” he said.

Greenfield says the proximity of Portlaoise to Dublin, via the motorway, will allow the export of its products to its established customers in Europe.

As to the future, Mr Field pointed to a possible expansion of its Portlaoise base. He said there are three units to the business.

“Our long term vision, beyond this as being our first foray into the European market from a manufacturing perspective, would be to expand in all those sectors into Europe,” he said.

He said the company has plans to expand its production of ethanol, hydrogen and renewable natural gas in the renewable energy market. There is also a vision to supply alcohol to Canadian beer brewers and distillers supplying drinks to European markets.

Mr Field said Greenfield already supplies these sectors in the United States and it is “absolutely” the case that it wants to do the same from Portlaoise.

“There is additional land for us to do that (at our Portlaoise site),” he said. Another possible spin-off is the supply of the dried grain by-product from alcohol distillation to the agribusiness sector.

In the past multinationals have tended to operate plants which have had limited production.

When products stopped being made factories have sometimes closed. Mr Field said Greenfield does not operate such a model and believes its strength is diversification.

“We have a lot of different products in many many markets,” he said. Mr Field paid tribute to the IDA and Laois County Council,

“We look forward to a new chapter and can now call Ireland our second home,” he said

Ken Finegan, Managing Director, Ireland has worked as an agent for the company for the past decade in Ireland. He said a broad spectrum of roles would need to be filled.

He said staff would be needed for laboratory, maintenance, warehousing and other roles. Recruits will include graduates.

Minister for Justice and Equality, Charlie Flanagan said, “The significant number of jobs being created is a very welcome boost to the economy of Portlaoise and I want to thank the IDA for all they did to secure them.

“Most of all, however, I want to congratulate Greenfield Global. I look forward to their success, and indeed growth, here in Portlaoise,” he said.

“Portlaoise's location is perfect. It will give you the opportunity to access your customer base in Cork, Dublin and Limerick,” said the TD.

Minister Flangan thanked and wished the company well on their venture in Laois.