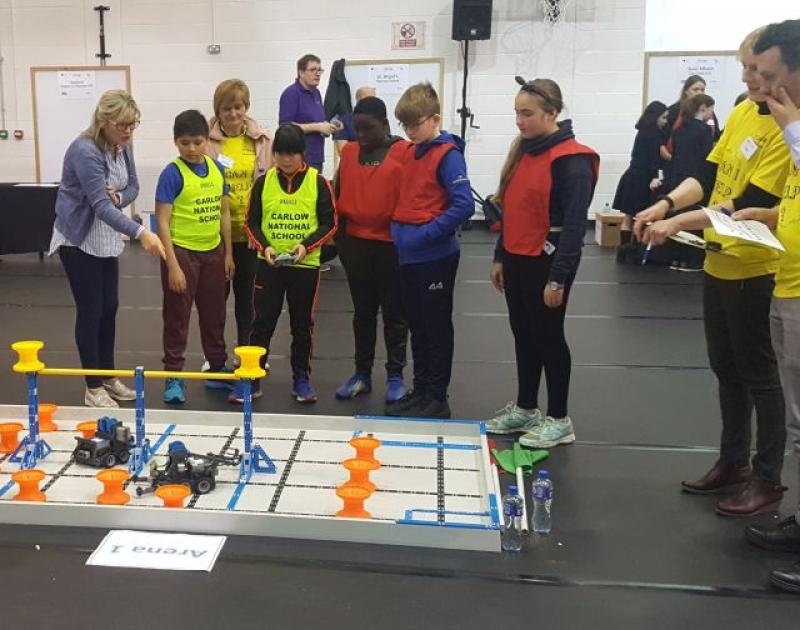 400 primary school children from across the region are gearing up to participate in the VEX IQ Robotics competition, which takes place at Institute of Technology Carlow this Friday, March 6.

The budding engineers have been preparing for the competition since last October and spent months building and enabling their own robots to participate in the competition, which is organised by Student Services and assisted by a team from the Faculty of Engineering, the Computing Services Department, Estates and the Sports Office.

Schools from Carlow, Kilkenny, Kildare, Laois and Wexford will partake in the competition.

By its nature, the study of robotics inherently incorporates all four pillars of STEM – science, technology, engineering and maths.

VEX IQ is a snap-together robotics system designed from the ground up to provide an opportunity to future engineers of all skill levels to engage and learn.

As part of the programme, the children design, build and programme their own robot, which they then use against other school groups in the pre-designed ‘arena’ of the VEX IQ Challenge in IT Carlow's Sports Hall at the Barrow Centre.

Participants will be expected to operate their robot, using both driver control and the autonomous programme they have written.

"There's more than just robots beings brought to life in the VEX IQ Robots competition. One of the most gratifying elements of the competition is creating a passion for STEM and hopefully a new generation of innovators," said David Denieffe, Vice-President for Academic Affairs, Institute of Technology Carlow.

"The competition gives pupils an opportunity to see that science and maths have real life application beyond the classroom and to immerse themselves in the previously unexplored worlds of engineering and coding.

"We look forward to welcoming schools from Carlow, Kilkenny, Wexford, Laois and Kildare on the day and showing them the many opportunities ahead of them, including studying STEM at IT Carlow in the future."

Prizes will be awarded to six schools for the best robots and an accompanying STEAM poster competition.

The VEX IQ Robotics Competition, takes place in the Sports Hall from 10am to 1.45pm.