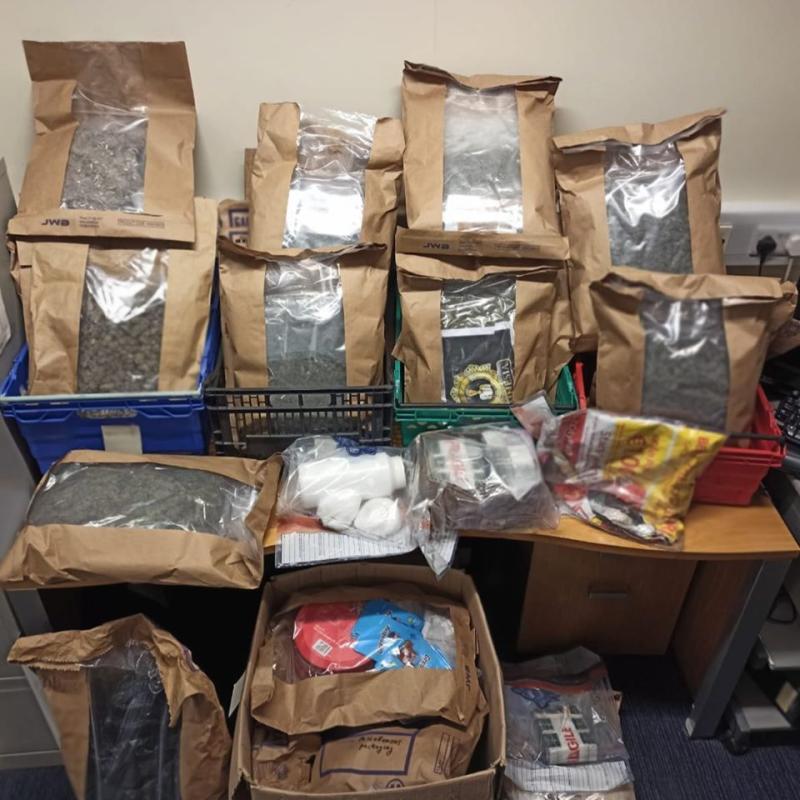 Some of the drugs seized in Portlaoise

Two Portlaoise residents have been charged with drug possession and supply offences following the seizure of a substantial quantity of drugs in the Laois town last week.

Christopher Carroll and Fiona Sutton, both of 82 Rossvale, Mountmellick Road, were charged by Gardaí under Sections 3 and 15 of the Misuse of Drugs Act at Portlaoise Garda Station on Friday, April 10.

The pair, who are both aged in their 30s, were subsequently brought before Justice Bernadette Owens at a special sitting of the district court in Tullamore on Friday.

They were remanded on bail to appear before Portlaoise District Court on June 11 next.

The charges arise from the seizure of €555,000 worth of drugs at 82 Rossvale on Wednesday, April 8 last. During a search of the house, Gardaí seized cannabis herb with an estimated street value of €500,000.

Cocaine worth €35,000, prescription drugs and other drug paraphernalia were also recovered from the property during the operation carried out by the Laois drugs unit.

A third individual, who was found with €20,000 worth of cannabis, was charged with drug offences on Thursday last after questioning in Birr Garda Station.

He has yet to make a court appearance but is due before the District Court in Portlaoise on April 16.

Gardaí responded to reports of what they called "suspicious activity" in Rossvale, Portlaoise on Wednesday, April 8.

Upon arrival, a man was searched and was discovered to be in possession of a package containing 1kg of a substance believed to be cannabis (pending analysis) with a street value of €20,000.

They say the subsequent search led to the discovery of €500,000 worth of drugs and the arrest of the other two people.