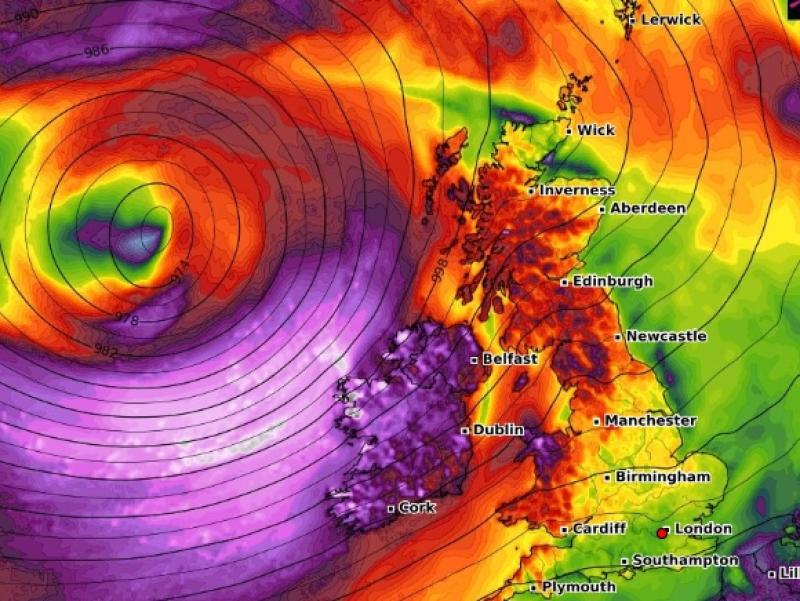 Met Éireann has issued weather warnings for parts of Ireland as a bout of stormy wet and windy weather steers toward Ireland from the Atlantic.

The forecaster has issued a Status Yellow Wind Warning for counties along the west coast for Thursday and Friday. It also forecasts that wet and windy weather will impact other parts has we head into the weekend.

The Status Yellow warning says that through Thursday night and Friday, south to southeast winds, veering southwesterly will reach mean speeds of 45 to 65 km/hr with gusts of 85 to 110 Km/hr, mainly in coastal areas and on exposed hills and mountains. That warning is in place from 9pm on Thursday until 6pm on Friday.

A similar warning has been issued for for Donegal. Through Friday, southerly winds veering southwesterly will reach mean speeds of 45 to 65 km/hr with gusts of 85 to 110 km/hr, especially in coastal areas and on exposed hills and mountains.

That warning is valid from 6am on Friday until 9pm on Friday. MORE BELOW TWEETS.

Here is our 7 day Atlantic Chart, showing the pressure and precipitation forecast in 6 hour intervals.https://t.co/9Giuj4CR5mhttps://t.co/9gKN6SVok4 pic.twitter.com/kb8EHi6Gkz

In its latest forecast, Met Éireann states most places will be dry with good sunshine on Thursday morning however, heavy or thundery rain will arrive in the southwest in the evening and extend northeastwards.

Highest temperatures of 16 to 19 degrees and a degree or two cooler in southern coastal areas with strengthening southeast winds.

Wet and windy with outbreaks of rain spreading northeastwards across the country on Thursday night, turning heavy at times and followed later by showers.

It will be a windy night with southwesterly gales on Atlantic coasts. Temperatures no lower than 10 or 11 degrees.

Friday will be windy with sunshine and showers and the risk of very strong winds near the west and north coast. Showers will be most frequent over the western half of the country with the southeast becoming largely dry.

Temperatures on Friday will be a few degrees cooler than of late with highs 12 to 16 degrees west to east. Gusty southwesterly winds remaining fresh to strong throughout the day with gales continuing on Atlantic coasts.

The showers will become confined to western coasts on Friday night with lows of 7 to 9 degrees and remaining windy.

It is forecast to be mostly dry on Sunday with sunny spells and just well-scattered showers. A little cloudier in the north throughout. Milder than previous days with highs of 16 to 19 degrees, warmest in the east, in a light to moderate southwest breeze.

High pressure will re-establish itself close to Ireland early next week with mostly dry and settled weather, with light winds and maximum temperatures in the high teens or low twenties.

Frontal cloud and rain may, however, move into west and northwest counties with slightly cooler weather here.