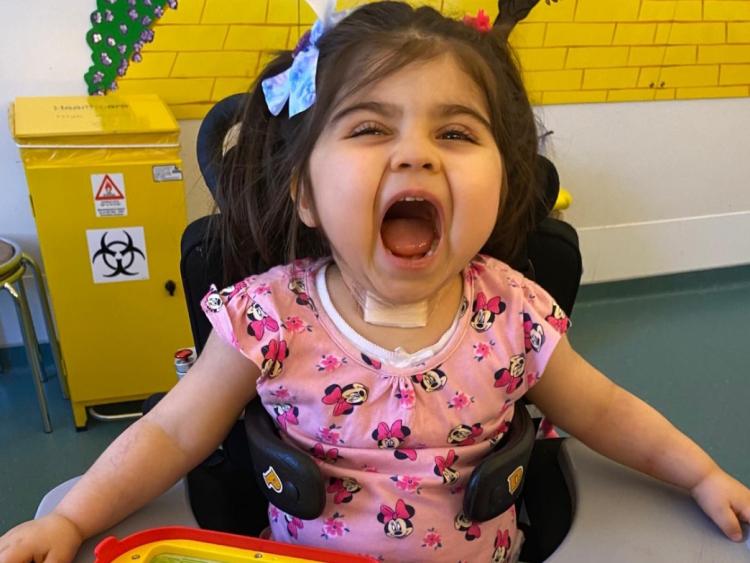 Amira O'Toole Rauf has gotten her voice back but "it remains to be seen if it's a Dublin or Carlow accent", her mother Caroline has said as the family prepare to bring the toddler home.

Amira, who is two years old, was left paralysed from the chest down following a car accident in Laois on November 6 in 2018.

The brave toddler has undergone decannulation this week whereby a tracheostomy tube is removed once the patient no longer needs it.

Her mother said: "Amira is doing great. We have our voice - which is a blessing - and it remains to be seen if it's a Dublin or Carlow accent we will have but we are over the moon.

"Amira lost enough and she deserves to have her voice, she is one of a kind, one intelligent little lady with a heart of gold and a great character."

Amira has a severed spinal cord and will never walk again. She has spent most of her time in Temple Street Hospital since the accident and her mother has been fighting to get her daughter home.

Caroline, who lives in Ballinabranna, said previously that they had been refused a home care package and said: "In my eyes, she is medically fit for discharge."

Speaking to Carlow Live in April, Caroline said: "Amira has made fantastic progress and she's now no longer ventilator dependent.

"Hopefully within the next 2-3 weeks Amira will have her tracheostomy removed [the procedure which was carried out this week].

"All going well Amira will be discharged in 5-6 weeks."

Both Caroline and her husband, Adnan, have been at their daughter's bedside since the accident.

She added: "I have no words to describe how I feel. I just can't wait to carry her home through her front door."

"It's safer for Amira when we come home. We will be in complete lockdown no visitors etc. due to Covid-19.

"Amira will not have to leave her home as she has a sensory area built on to the side of her home which is due to be completed in the coming weeks.

"My main priority is to keep Amira safe and in her home. A hospital environment is not the place to be at this time with the outbreak of Covid-19."

Amira will be three in September.