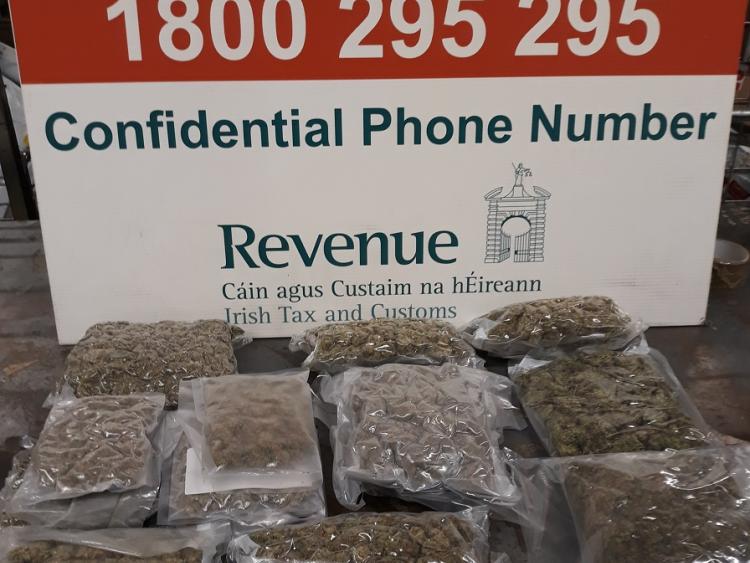 The illegal drugs have an estimated value of over €33,600 and were discovered in 7seven separate parcels which originated from Spain. The parcels were declared as items such as DVD Player, T-Shirts and Textiles, and were destined for addresses in Carlow, Dublin, Mayo and Wicklow.

During the routine operation, the Revenue officers were assisted by detector dog Bailey.

In a separate operation today, Revenue officers at Athlone Mail Centre seized over 880 grams of herbal cannabis and 13,500 cigarettes. The illegal drugs have an estimated value of over €17,500 and were discovered in 35 separate parcels which originated in the United Kingdom and the United States.

The smuggled cigarettes were discovered in 30 separate parcels originating from China and were declared as items such as Playing Cards, Plastic Rulers and Jigsaw. The cigarettes have a retail value of over €9,000, representing a loss to the exchequer of almost €7,200. The parcels were destined for addresses in Carlow, Dublin, Kildare and Tipperary.

Investigations are ongoing in relation to all seizures.

These seizures are part of Revenue’s ongoing work targeting smuggling and shadow economy activity. If businesses or members of the public have any information regarding smuggling, they can contact Revenue in confidence on free-phone number 1800 295 295.