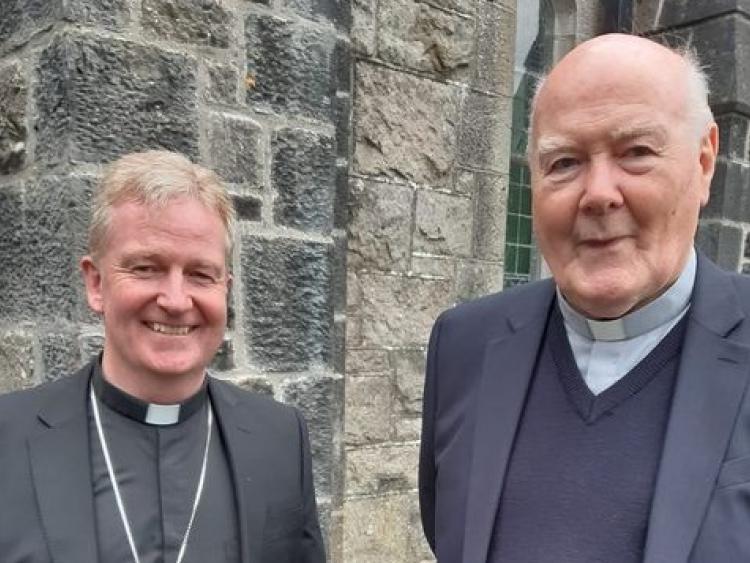 A retired Laois parish priest who baptised a baby in Carlow back in 1971, attended his ordination to Bishop last weekend.

Fr Francis MacNamara (below right) from Mountmellick attended the ceremony. 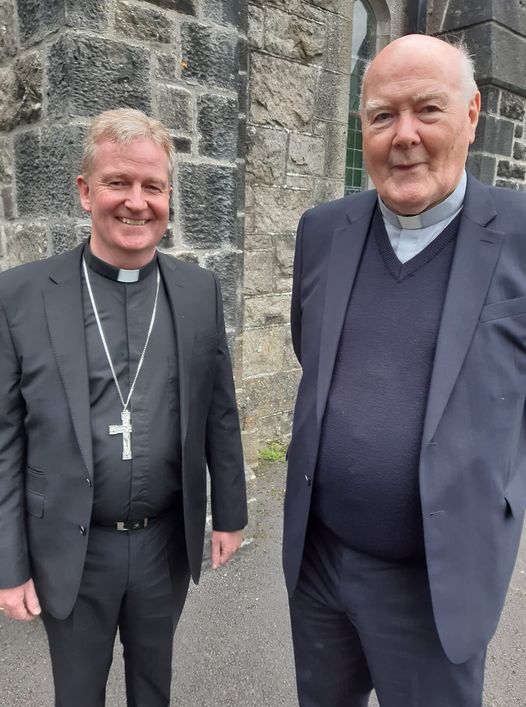 Mountmellick Parish revealed the lovely connection in a post of the above photograph on their Facebook page on Sunday.

Archbishop Michael Neary of Tuam was the Principal Consecrator, and His Excellency Archbishop Jude Thaddeus Okolo, Apostolic Nuncio to Ireland, and Bishop Denis Nulty of Kildare & Leighlin, was the co-consecrators.

Father Vincent Sherlock, Parish Priest of Kilmovee, Co Mayo, in the Diocese of Achonry, preached the homily during the Ordination Mass.

The Ordination Ceremony was filmed and livestreamed by iCatholic on the homepage of the diocesan website: https://achonrydiocese.org/

Pope Francis announced, on 27 January 2020, the appointment Father Paul Dempsey as Bishop of Achonry.  The news of the appointment was warmly welcomed by the people of Achonry, and Bishop-elect Paul`s family, friends and brother priests.  However, due to the introduction in mid-March of public health restrictions to help curb the spread of Covid-19, the decision was taken to defer the date for the Episcopal Ordination Mass.  On 17 June, Father Dermot Meehan, Diocesan Administrator of the Diocese of Achonry, announced the new date for the ceremony as Sunday 30 August, at 3.00pm.

Planning for this Ordination Mass was in accordance with the current Government and NEPHET guidelines and the number of people who will be in attendance has been greatly reduced.

Father Paul Dempsey was born in Carlow Town on 20 April 1971.  He is the youngest in his family, having one brother and two sisters.

In 1978 the Dempsey family moved to Athy, Co Kildare, where Paul was educated by the Christian Brothers at primary and secondary level.  He joined the seminary in 1989.  His studies took place in the Milltown Institute, Dublin, Saint Patrick’s College, Carlow and All Hallows College, Dublin.  During his formation for the priesthood his mother, Berry, died from cancer in February 1994 and his father, Tony, died suddenly twelve days later.  On 6 July 1997, Father Paul was ordained to the priesthood in the Cathedral of the Assumption, Carlow, by Bishop Laurence Ryan.

Father Paul’s first appointment was as curate in Clane & Rathcoffey Parish, Co Kildare and started a weekly article in the Leinster Leader newspaper.  After seven years he moved to Kildare town as curate and was also appointed Youth Director and Vocations Director for the diocese by Bishop Jim Moriarty.  During this time, Father Paul organised two diocesan World Youth Day pilgrimages to Cologne (2005) and Sydney (2008) as well as many other youth initiatives.  Father Paul also presented a weekly religious and social affairs programme on Kildare FM Radio on Sunday mornings.

In 2008, Father Paul did further studies in the Milltown Institute, Dublin.  He completed an honours Master’s Degree in Theology in the area of faith and culture.  His thesis was entitled: The Contemporary Irish Catholic Church – A Church in Crisis or in Question?

On completion of his studies, Father Paul took up his appointment as curate in the parish cluster of Naas, Sallins and Two-Mile-House in 2009.  In August, 2014, Bishop Denis Nulty appointed Father Paul to Newbridge Parish and also as Vicar Forane for the Kildare & Leighlin North Deanery consisting of 17 parishes.  On 1 September 2015, Father Paul was appointed Parish Priest of Newbridge and Administrator of Caragh and Prosperous Parishes.  The parish has approximately 32,000 parishioners.

On 27 January 2020 Pope Francis announced the appointment of Father Paul Dempsey as the new Bishop of Achonry.