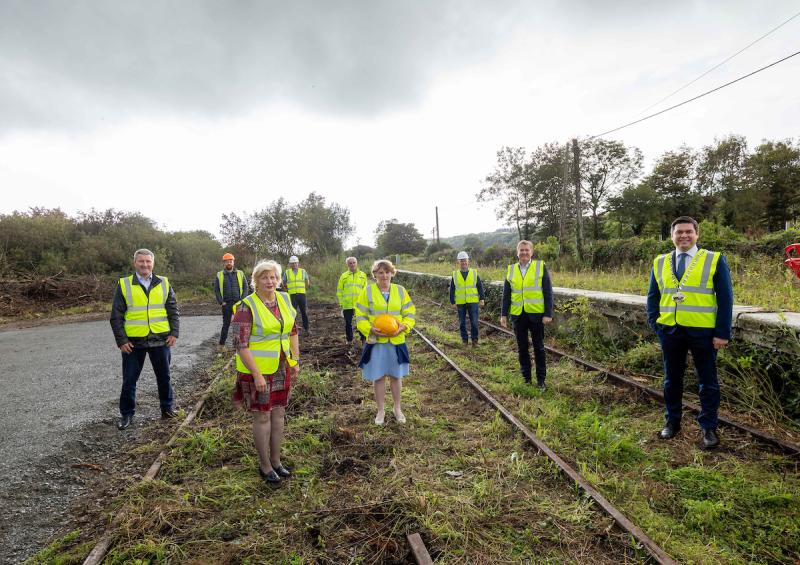 The first phase in the construction of the much-anticipated South East Greenway (incorporating the Kilkenny Greenway) got underway recently when MJS Civil Engineering commenced the contract to lift the rails and sleepers from the disused New Ross to Waterford railway line.

The Greenway will be a 24km cycling and walking route linking New Ross, County Wexford with Ferrybank, County Waterford through the countryside of South Kilkenny.

The commencement of the rail lifting contract was recently marked with a photograph on the border between Waterford and Kilkenny, as the contractors entered County Wexford to continue their work, representatives of Wexford, Waterford and Kilkenny local authorities, together with contractor representatives met on the old railway station site at Rosbercon in New Ross to record the historic occasion.

The rail and sleeper lifting works are scheduled to conclude within the next number of months. This will enable the tender process for the main construction contract to be completed, with construction works expected to begin before the end of the year.

The Greenway is a joint initiative of Wexford County Council, Kilkenny County Council and Waterford City & County Council, supported by the local Partnership organisations. The overall project cost is €15m, with an approved €8m grant from the Department of Transport Tourism and Sport.

The Greenway is to be constructed along the former railway line between Mountelliott near New Ross and Waterford City, crossing the River Barrow via the iconic Red Bridge and passing through South Kilkenny, skirting close to the villages of Glenmore and Slieverue. The Greenway will also afford spectacular views of the new Rose Fitzgerald Kennedy Bridge across the river Barrow, before reaching the edge of Waterford City. From there it will link to the Waterford Greenway via the proposed North Quays and Bilberry Greenway Projects, creating a continuous 72km Greenway of regional significance spanning from New Ross to Dungarvan.

The disused railway line has remained in the ownership of CIE / Irish Rail since the discontinuation of passenger services in 1963 and discontinuation of freight services in 1995. CIE / Irish Rail has now commenced negotiations with the local authorities to facilitate the development of the Greenway, with proposals to incorporate some of the features of the New Ross to Waterford Railway into the overall Greenway experience.

“The Greenway is a fantastic development not only for South Kilkenny but for the whole South East region,” said cathaoirleach of Kilkenny County Council, Cllr Andrew McGuinness. “We have seen how Greenways in other parts of the country have contributed to business and job creation and brought new life to rural areas. I have no doubt that this Greenway development will also stimulate economic development across this region.

“I want, in particular to take this opportunity to sincerely thank the many landowners and residents along the route of the Greenway for their continued assistance, co-operation and support.”

The South East Greenway is scheduled to open in Spring 2022.