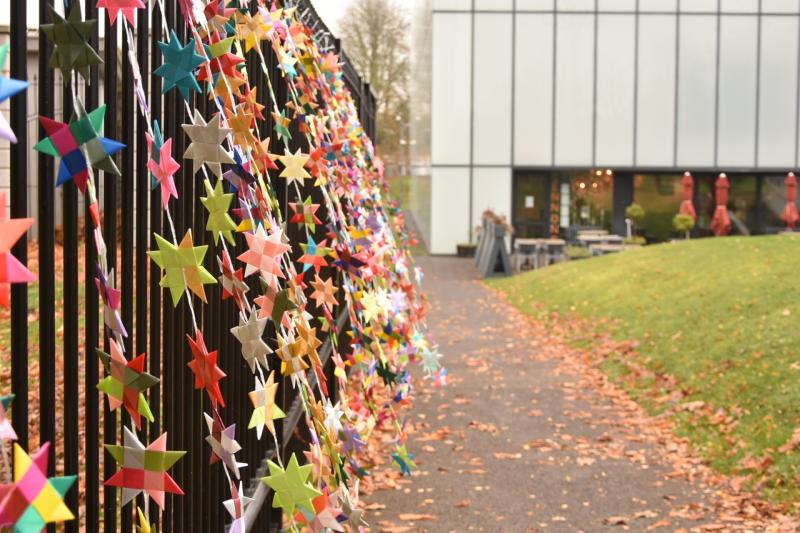 The One Million Stars Ireland project celebrated its second birthday recently, announcing that star weavers from Carlow and across the country have helped the project reach the significant milestone of 100,000 stars.

Each eight-point star represents light, hope and solidarity against violence, while promoting the project’s eight points of healthy love within relationships.  Carlow College’s star installation was launched to coincide with this year’s 16 Days of Activism against Gender Based Violence global campaign.

The One Million Stars Ireland project is an inclusive community arts project, which connects communities across Ireland in solidarity against domestic abuse and all forms of violence.

Part of the global One Billion Stars project, founded in Australia in 2012 by artist Maryann Talia Pau after the rape and murder of an Irish woman living in Melbourne, the One Million Stars Ireland project was brought to Ireland by Art Therapist Siobhan McQuillan and Amber Women’s Refuge in Kilkenny.

At the project’s launch in November 2019, 10 stars were woven by survivors of domestic violence and abuse.  There are now star weaving communities in 18 counties who, together with Carlow based weavers, have to date woven 100,000 stars to end violence in Ireland.  The youngest star weaver is five years of age, the eldest is 89.

"There was sexual abuse, physical abuse, bursts of rage for days.The scars from the emotional abuse I don’t think I could even describe" *Aine is a survivor of Domestic Violence & Abuse.She could be your Mother, your Daughter, your Sister, your Friend. She could be you.#16days pic.twitter.com/fEMujtKg1y

“We are so excited to have already reached this significant milestone of 100,000 stars in Ireland.  We are well on our way and on track to reach our goal of One Million Stars to end violence in Ireland.  I’d like to thank the committed star weavers, star weaving groups and valued volunteers in Carlow who have been instrumental in helping us reach this milestone.

Amber is calling on families, businesses and community groups in Carlow to weave stars to help them reach the next milestone.

Register as a star weaver at www.onemillionstarsireland.ie to receive a star weaving pack.

“Over the last two years, the project has gained real momentum within communities across Ireland, which has helped us reach this important milestone.

"The project started with 10 stars at its launch in 2019.  The 100,000 stars milestone represents a phenomenal 10,000% growth rate, made possible by committed star weavers in Carlow and beyond.

Amber launched its #womenbehindthenumbers campaign on day one of the 16 Days of Activism.  A series of audio recordings of local women from Carlow and Kilkenny who are survivors of domestic violence and abuse, #thewomenbehindthenumbers campaign seeks to highlight the real women’s experiences behind the statistic of one in four Irish women experiencing domestic abuse.  The recordings are available at www.amberwomensrefuge.ie.

Agriculture minister 'confident' that Ireland can avoid another lockdown