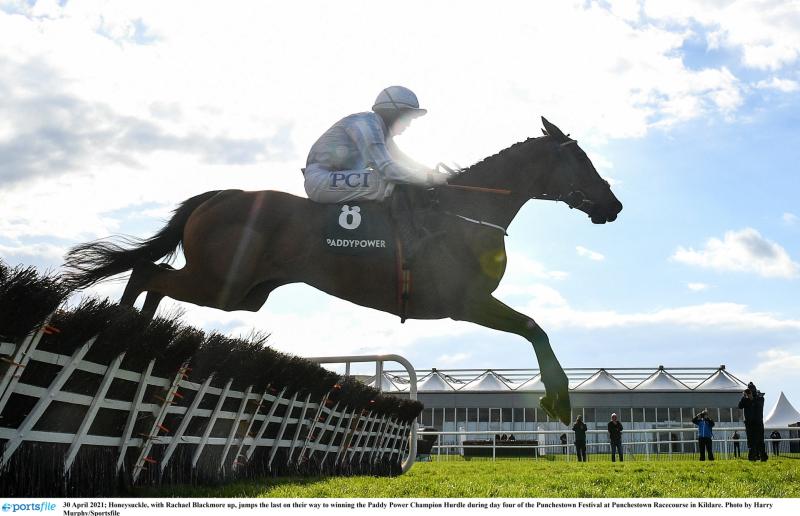 Day four of the Punchestown Festival continues on Friday afternoon with an excellent eight-race card. The action gets underway at 3.40pm and concludes at 7.45pm.

The ground at the track is currently Good to Yielding and there is watering taking place at the track. The forecast is for scattered showers. We have previewed the action with our race by race guide and you can find the more tips at www.Irishracing.com

An Droichead Gorm was successful in a point last time out, but Alpha Male sets the standard following some notable runs under Rules.

Blue Sari and El Barra are both lively players along with the unexposed Busselton. Fighter Allen won last time out and is another who warrants attention for Willie Mullins. However, preference is for French Dynamite who recorded success in Graded company last time out and is capable of further improvement going forward.

Scarlet And Dove was third to Elimay in the Mares’ Chase at the Cheltenham Festival and she looks to have a tough job of reversing the form with Willie Mullins’ charge who showed a fine attitude to score on that occasion. She is taken to win this.

Honeysuckle should be extremely hard to beat. Unbeaten in 15 starts under Rules, she was brilliant when defeating Epatante in the Champion Hurdle at the Cheltenham Festival to record her second win in the contest and she should take an awful lot of beating here. Whilst not at her best when successful in this event last year, she should still prove too strong in this event.

Flame Bearer is deeply respected having racked up the three-timer when successful at Navan last time out, his second straight Graded win. Three Stripe Life deservedly landed Grade One honours when successful at Aintree and is also respected along with Supreme Novices’ Hurdle third Kilcruit. However, State Man gets the vote. He landed the County Hurdle at the Cheltenham Festival and was clearly a Graded horse in a handicap on that occasion. He should prove tough to beat.

Vaucelet was an impressive winner at Fairyhouse last time out and clearly warrants attention. However, Billaway finally landed the Foxhunters’ at the Cheltenham Festival and is taken to go one better in this race.

Bring On The Night was fourth in the Supreme Novices’ Hurdle and has his sights lowered here for Willie Mullins, but it tough to look past stable companion El Fabiolo who was second to Jonbon in Grade One company last time out.

Second on his first two starts for Willie Mullins, Don Chalant is taken to go one place better in the finale with both of those efforts suggesting this slight step up in trip will suit.