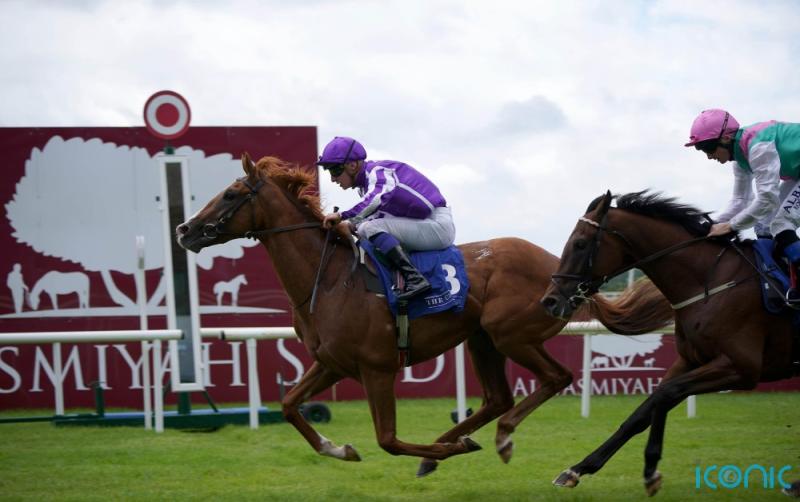 Curragh debutant a smart performer in the making

Proud And Regal looked a horse with a bright future in winning on his debut at the Curragh.

Sent off at 16-1 for the Barronstown Stud Irish EBF over seven furlongs, Killian Leonard’s mount had a nice early position and while he was niggled along a touch three out, once he entered the final furlong he stayed on particularly strongly.

The Donnacha O’Brien-trained Galileo colt was always holding Tiverton in the closing stages, to triumph by three-quarters of a length.

“I thought he was a nice horse, but he was kind of sleeping at home. He’s quite green and I said I’d give him a run and he’d improve a lot for it,” said O’Brien.

“We knew he had ability and it’s nice to see him going and doing that.

“He’s not a horse I’ve absolutely drilled at home, he’s a Galileo and you like to take them along slowly. In fairness to him he did well today.

“We’ll take him back and have a look at the programme, but I’d imagine he’ll go to stakes company next.”

O’Brien also had news of his Irish Derby runner-up Piz Badile, who left a below-par Epsom effort behind in proving best of the rest behind the impressive Westover.

“He’s very good and came out of it perfect. It was a great run and it was nice to see him bounce back after a disappointing effort at Epsom,” O’Brien said.

“Obviously the winner was very good, but it was a good run.

“He’s got plenty of options and we haven’t decided anything yet. I have to speak to the owners and we’ll come up with a plan.

Ano Syra landed a significant pot in winning the five-furlong Paddy Power Rockingham Handicap, prevailing by half a length at 9-2 for trainer John Feane and apprentice jockey Jamie Powell.

“Jamie has ridden five winners for me now from eight rides with two seconds and a fourth. He’s doing well for me at the moment anyway,” said Feane.

“We got her before Christmas, Charlotte and James (Musgrave, owners) were kind enough to send her to us, and she’s kept improving. In fairness to Kevin Manning he’s done a lot of work with her as well.

“We thought she’d get a bit of black type in the future and we’d plot a course through the year with her.

“We were a little bit worried about the ground but she was brave, she has a big heart.

“I know she had a light weight, but she was a three-year-old taking on older sprinters. She travelled really well and she’s just a good filly.”