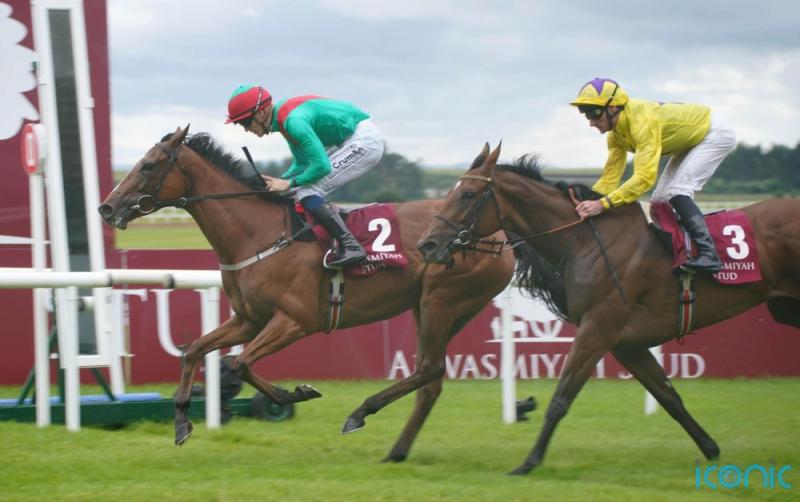 La Petite Coco deftly made the step up to Group One class with victory in the Alwasmiyah Pretty Polly Stakes.

The Paddy Twomey-trained filly was a winner four times last season, taking a maiden and an auction race before gaining black-type status with victories in the Group Three Give Thanks Stakes and the Group Two Blandford Stakes.

A four-year-old daughter of Ruler Of The World, La Petite Coco had not been seen the latter run in September, and therefore had both top-calibre opposition and a 287-day break to overcome at the Curragh.

Neither hindered her as she raced prominently and held off the challenge thrown down by William Haggas’ 11-4 favourite My Astra to prevail by half a length at 9-1 under Billy Lee.

“To be honest I couldn’t see her being beaten coming here,” said Twomey.

“The level she showed last year to beat Love (in the Blandford) and the winner of this race (Thundering Nights), I didn’t enter her in the Arc for fun. I think she’s top class.

“We decided, Barry (Irwin, of owners Team Valor) and I, that we’d start her campaign in the middle of the year with a view to the second half. She didn’t have a run but I don’t think it matters to her.

“We planned to start it here. The Yorkshire Oaks is something we’ll consider, the Fillies and Mares at Ascot, the Arc, the Breeders’ Cup maybe and Hong Kong. That sort of line-up.

“We were keen to start at home, we didn’t really want to travel for her first run. It’s great and that’s why we get up and try to do it. We’re lucky that people like Barry have sent us some good horses.”

Twomey was previously involved in the pre-training of Haggas’ horses and used that experience to pave the way to training in his own right.

He said: “William Haggas is a good friend of mine and we pre-trained for him. Then I decided three or four years ago to really give training a go. We did it first in my own colours with a permit.

Irwin, meanwhile, was quick to praise the talents of Twomey.

“He’s a fantastic trainer. When we bought the filly we sent her directly to Paddy, we had good hopes but we didn’t know that she was this good,” he said.

“Today I thought that if she really is as good as he thinks we could win it but I can’t believe she hung in there, at the end she was running on fumes. She’s a gutsy horse.

“I’ve backed off from racing in the United States, I’m not happy with it there.

“I have a lot more faith in what’s going on here and it’s more fun. I’ve been coming here since 1971, raced a few horses and we’ve decided to send a few more over here.

“Our partners enjoy it, I’ve got 12 people here right now on a trip. We went to Paddy’s yesterday and now we’re going to England and France. I’m trying to promote having more racing over here.

Twomey also had another runner in the race in the shape of Rosscarbery, who made the frame in third at 20-1 under Wayne Lordan having fully justified the decision to supplement her.

However, drama was to follow as she was disqualified by the stewards after jockey Wayne Lordan weighed in light.

Niall Cronin, communications manager for the Irish Horseracing Regulatory Board, said: “Wayne Lordan weighed out at 138.1 and weighed back in at 133.5. As a result there was an inquiry into the weighing-in procedures of the third-placed horse.

“As per Rule 231, Section 1, the horse had to be disqualified. The stewards have referred the matter on for further investigation. Mr Twomey is aware of that.”