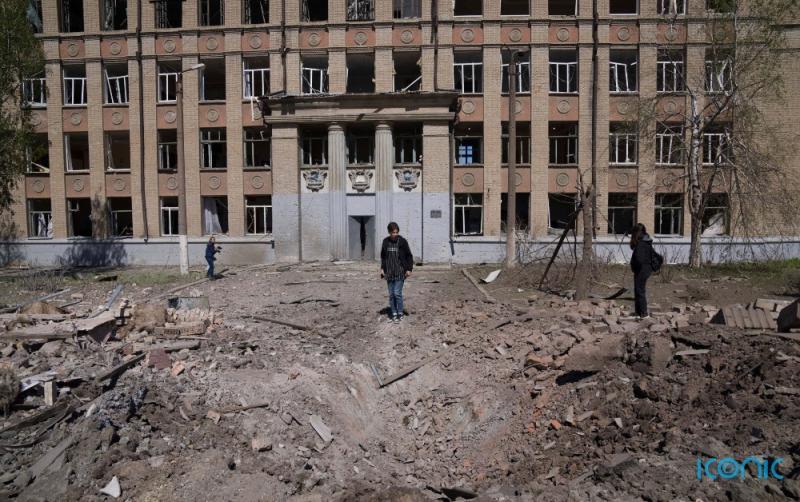 Dozens of Ukrainians are feared dead after a Russian bomb destroyed a school sheltering about 90 people in the basement as Moscow’s invading forces kept up their barrage of cities, towns and villages in eastern and southern Ukraine.

The governor of Luhansk province, one of two areas that make up the eastern industrial heartland known as the Donbas, said the school in the village of Bilohorivka caught fire after Saturday’s bombing.

“Most likely, all 60 people who remain under the rubble are now dead,” governor Serhiy Haidai wrote on the Telegram messaging app.

Russian shelling also killed two boys, aged 11 and 14, in the nearby town of Pryvillia, he said.

Since failing to capture Ukraine’s capital Kyiv, Russia has focused its offensive in the Donbas, where Moscow-backed separatists have been fighting since 2014 and occupy some territory.

The largest European conflict since the Second World War has developed into a punishing war of attrition due to the Ukrainian military’s unexpectedly effective defence.

To demonstrate success, Moscow was aiming to complete its conquest of the besieged port city of Mariupol in time for Victory Day celebrations on Monday.

All the remaining women, children and older civilians who had been sheltering with Ukrainian fighters in a sprawling steel mill that is the city’s last defence holdout were evacuated on Saturday.

The troops still inside have refused to surrender and requested international help to get them out too.

Capturing Mariupol would give Moscow a land bridge to the Crimean Peninsula, annexed from Ukraine during a 2014 invasion.

Buildings had gaping holes in the roofs, including one under which hundreds of fighters were likely to be hiding.

After rescuers evacuated the last civilians on Saturday, Ukrainian President Volodymyr Zelensky said in his nightly address that the focus would turn to extracting the wounded and medics, adding: “Of course, if everyone fulfils the agreements. Of course, if there are no lies.”

Elsewhere on the coast, air raid sirens sounded several times early on Sunday in the major Black Sea port of Odesa, which Russia struck with six cruise missiles on Saturday.

The other two missiles hit the Odesa airport, where a previous Russian attack destroyed the runway.

In a sign of the dogged resistance that has sustained the fighting into its 11th week, Ukraine’s military struck Russian positions on a Black Sea island that was captured in the war’s first days and has become a symbol of Ukrainian resistance.

Ukraine’s military said retreating Russian forces destroyed three bridges on a road north-east of the city to try to slow the Ukrainian advance.

Ukrainian leaders warned that attacks would only worsen in the lead-up to Victory Day, when Russia celebrates Nazi Germany’s defeat in 1945 with military parades.

Russian President Vladimir Putin is believed to want to proclaim some kind of triumph in Ukraine when he addresses the troops in Red Square on Monday.

In neighbouring Moldova, Russian and separatist troops were on “full alert”, the Ukrainian military warned.

The region has increasingly become a focus of worries that the conflict could expand beyond Ukraine’s borders.

Pro-Russian forces broke off the Transnistria section of Moldova in 1992, and Russian troops have been stationed there since, ostensibly as peacekeepers.

Those forces are on “full combat readiness”, Ukraine said, without giving details on how it came to the assessment.

Moscow has sought to sweep across southern Ukraine both to cut off the country from the sea and create a corridor to Transnistria.

But it has struggled to achieve those objectives.

A satellite image taken on Sunday morning by Planet Labs PBC showed smoke rising from two sites on the island.

On the island’s southern edge, a fire smoked next to debris.

That corresponded to a video released by the Ukrainian military showing its strike on a Russian helicopter that had flown to the island.

A Planet Labs image from Saturday showed most of the island’s buildings, as well as what appeared to be a Serna-class landing craft against the island’s northern beach, had been destroyed by Ukrainian drone attacks.

The most intense combat in recent days has taken place in eastern Ukraine.

Western military analysts said a counteroffensive by Ukrainian forces was progressing around Kharkiv.

The Ukrainian military said it retook control of five villages and part of a sixth near the north-eastern city.

In a video interview posted on his Telegram channel, Mr Haidai said that Kyiv’s troops had “moved to stronger positions, which they had prepared ahead of time”.

“All free settlements in the Luhansk region are hot spots,” Mr Haidai added.

“Right now, there are shooting battles in (the villages) of Bilohorivka, Voivodivka and towards Popasna.”

Mr Zelensky said in his nightly address that work would also continue on Sunday on securing humanitarian corridors for residents of Mariupol and surrounding towns to leave.

It remains unclear what will happen to the estimated 2,000 fighters at the Azovstal plant, both those still in combat and the hundreds believed to be wounded.

The Ukrainian government has been reaching out to international organisations to try to secure safe passage for them.

Mr Zelensky said officials were trying to find a way to evacuate them.

He acknowledged the difficulty, but said: “We are not losing hope, we are not stopping. Every day we are looking for some diplomatic option that might work.”

Summer Walking Festival to take place this month in Carlow