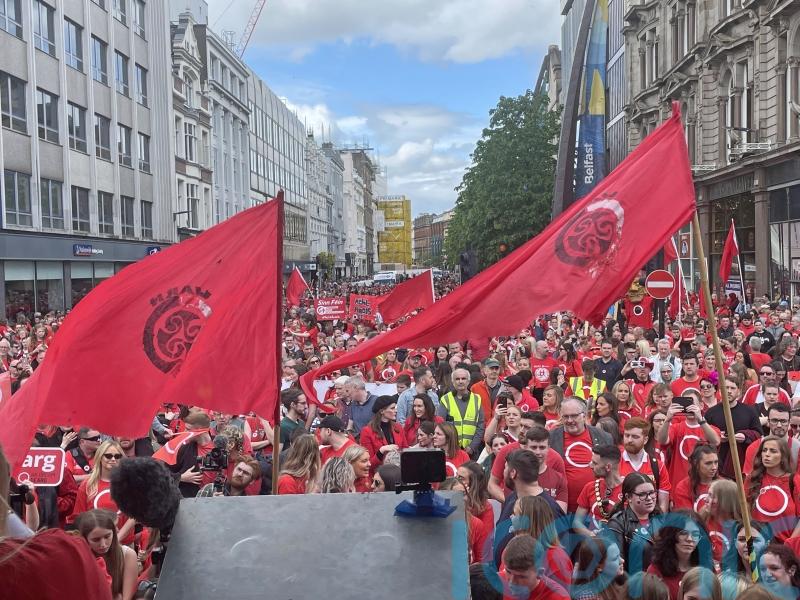 The UK Government has confirmed that it will introduce today (Wednesday May 25) legislation that aims to protect the Irish language in Northern Ireland to the House of Commons.

Under proposed plans for language and identity, the Irish language would be granted official status in Northern Ireland, which campaigners hailed as “historic”.

“It will provide for the recognition and protection of the Irish language and the development of the Ulster Scots and Ulster British tradition,” the department said in a statement.

The draft laws propose creating two commissioner roles – one for the Irish language and another for the Ulster Scots/Ulster British tradition.

An Office of Identity and Cultural Expression will also be established as part of the Bill, “to promote cultural pluralism and respect for diversity”.

Separate to the Identity and Language Bill, the UK Government also announced that it is granting Ulster Scots recognition as a National Minority under the Framework Convention for the Protection of National Minorities – a status already granted to Irish, Welsh, Scots and Cornish.

Legislative protections for the Irish language in Northern Ireland were a key plank of the New Decade, New Approach agreement that restored powersharing in January 2020 after a three-year impasse.

They were included in a broader package of cultural laws proposed for the Northern Ireland Assembly that was stalled amid continued political contention over the matter.

Last June, the UK Government pledged to pass the legislation at Westminster to break an impasse between Sinn Féin and the DUP over its introduction in the Stormont Assembly.

However, the Government failed to bring forward a Bill before its own self-imposed October deadline last year.

During his visit to Northern Ireland last week, Prime Minister Boris Johnson pledged to deliver on the cultural package.

Secretary of State for Northern Ireland Brandon Lewis said the Bill’s introduction “represents a significant milestone, not just in the continued delivery of New Decade, New Approach, but in laying down a new cultural framework for the people of Northern Ireland”.

“This legislation is carefully balanced, as negotiated by all parties, to ensure everyone in Northern Ireland benefits.

“Not only will the legislation faithfully deliver on the measures within New Decade, New Approach, it will also, importantly, ensure the principles of respect and tolerance, as stated in the Belfast (Good Friday) Agreement, continue to be realised.”

President of Conradh an Gaeilge Paula Melvin said: “We want to pay tribute to all of those activists and community pioneers who have been advocating for language rights down through the years. This day belongs to them.

“But let’s be clear, this is only the beginning of the legislative journey for this Bill. Painful experience with the British Government has taught us to take nothing for granted. Until we see this Bill fully enacted and indeed implemented in practice, we will continue to push ahead with the campaign.”

“We will have an Irish language act. That legislation will, however, fall short of the commitments given to us at St Andrews, especially when tested against the Welsh model.

“It remains, however, a historic advancement in our campaign for language rights and we welcome it as a significant staging post on our journey for equality here.”