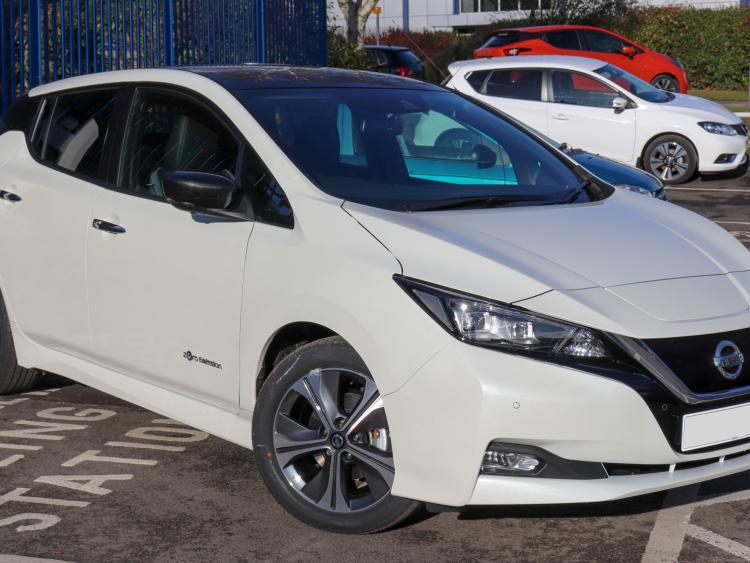 The latest generation of the Nissan Leaf

Fun fact: Nissan’s biggest seller used to be the Qashqai. That’s hardly surprising, given that it was also one of the biggest sellers of all brands nationwide.

Carlow Nissan now reports that the Leaf is outselling the Qashqai, and even second hand ones are hard to keep on the forecourt. The Carlow car buying public have clearly decided that electric is the way to go.

There are clearly good environmental reasons to drive a car that does not burn fossil fuels, but there are also very compelling financial reasons also.

But that’s only scratching the surface of the savings. Tax is €120.

Maintenance comes in at about €90 a year for the first three years because there are no oil changes, no fuel filters and numerous other bits and pieces that make up a modern combustion engine.

Carlow Nissan have anecdotally heard no stories of any difficulty getting insurance for it.

But best of all, of course, is that ‘filling it up’ will cost you approximately €2.50 on your electricity bill, from empty to full. For companies there is no benefit in kind tax. There is also a 50% reduction at the toll booths during peak hours and a 75% reduction at non-peak hours.

Nissan say that taking all of the costs into account, a Leaf is 90% cheaper per kilometre to run than a regular 2-litre diesel.

Currently you can charge it for free at public docking stations. All the signs are that that is likely to change over time, but not to an exorbitant degree. And while that’s all well and good, what’s it like to drive and to live with?

The version I drove was the 40 KWh version which, which produces 150bhp. There is also a 62KWh version that produces 214bhp.

A friend who owns one says it can accelerate as well as a Ferrari, which owes as much to the huge torque as the extra Kilowatts.

Unlike petrol or diesel engines which increase in power as more fuel is added to the engine, electric-powered cars are a bit like a light switch, either on or off. When it’s on, you have as much torque at 2kph as you have at 200kph.

At first glance it appears to be a rather large five door hatchback. It’s taller and wider than most. And that is borne out by quite roomy rear seats and a decent sized boot.

Inside it’s not unlike many cars of our era, with a central console that has satnav and a facility to play the music on your phone.

There are also swanky dashboard graphics which tell you how much of the battery you’re using or if you’re recharging (which it does when you ease off the accelerator or hit the brake).

There is simply a motor that goes faster or slower depending on how fast we press the accelerator. So there is a lever which gives you either ‘Drive’ or ‘Reverse’. And a little ‘P’ button on top of the lever is for parking.

There is adaptive cruise control and a feature that will be a favourite for those who spend a lot of time inching along in traffic.

It’s an e-pedal which applies the brakes when you ease off on the accelerator, meaning that you can drive safely with one pedal only.

There are also very clever features like an ability to heat up the car on cold mornings when it is still plugged into the mains electricity, via the mains.

So that by the time you get into the car it’s warm and you still have a full battery. The quietness when you turn it on initially is odd, but you get used to it. The reality is after an hour or so of driving it around, it feels like every other car.

The KWh version which I drove isn’t as hugely powerful as the 62 Kwh version. You have an eco mode which is perfect for most of your driving. It feels as fast or slow as a regular 1.4 litre petrol car then. Out of eco mode it feels like a 1.9 turbo diesel.

There is obviously a difference in range between eco and normal modes. Unlike some other electric cars, there is a separate, regular electric battery which runs things like the lights and the radio, so that saves you a little bit. Turning the air conditioning off will give you a few extra kilometres.

There are three ways to charge it up. The regular charging mode will take the 40kwh version about 7.30 hours, from empty.

There is also what they call ‘granny mode’ where you just plug it into a regular socket, which will take twice as long and finally there’s the super charge which can give you 80% in 40 minutes.

There is a lot of talk about a lack of charging points, and that is certainly a point. But it is improving and authorities understand the requirement for more infrastructure.

But the reality is that most of us don’t spend all day every day in the car. Most of us don’t do 250 kms in a single day or a single journey. For the majority of everyday driving, a Nissan Leaf is an excellent and low cost solution to family driving.

Nissan gives an eight year warranty on the battery, and say that if it ever drops below 80% capacity in that time, they will replace it.