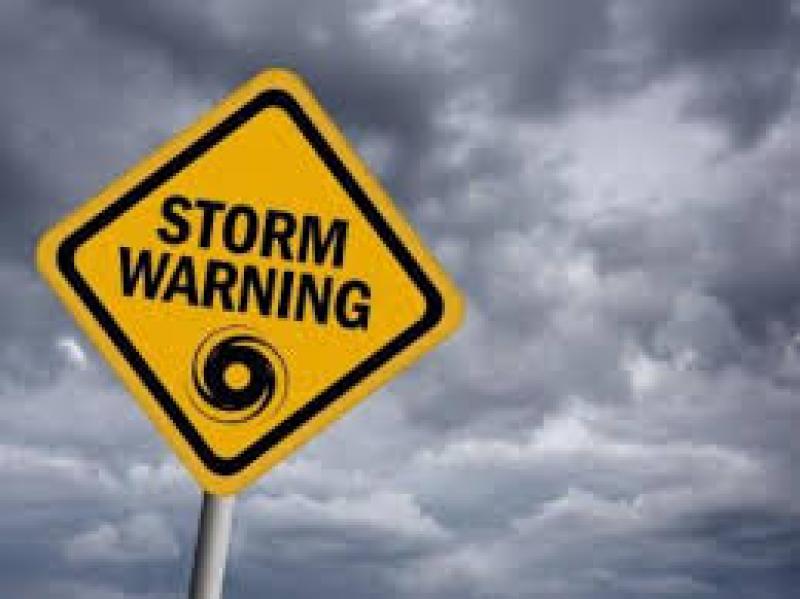 The national forecaster earlier issued a Status Yellow warning for the entire country with Atlantic depression Storm Barra expected to hit our shores on Tuesday morning.

On Sunday evening, this warning was upgraded to orange for Limerick, Cork, Clare, Kerry and Galway.

Met Éireann's warning for those counties read: "On Tuesday and Tuesday night, due to Storm Barra, southerly winds, later becoming to northwesterly, will reach mean speeds of 65 to 80 km/hr with severe or damaging gusts of up to 130 km/hr, possibly higher in coastal areas. Disruption to power and travel are likely.

In its Status Yellow warning covering the rest of the country, Met Éireann said: "Through Tuesday and for a time on Wednesday, an Atlantic depression named Storm Barra will bring very strong winds and spells of heavy rain across Ireland. Winds will be strongest in western coastal counties with severe or damaging gusts possible.

"There will also be high waves at sea and a significant possibility of coastal flooding on south and west coasts."

You can track Storm Barra as it approaches Ireland on the below animated graphic (Windy.com).

In its longer forecast for Sunday and most of next week,  Met Éireann says it will be "staying cold overall and become very windy, potentially stormy in parts, for a time."

"Rain, sleet and some hill snow will spread across the country on Sunday night followed by a clearance to showers in most areas by morning or soon after. Lowest temperatures of -1 to +3 degrees with moderate to fresh southerly winds veering westerly later," Met Éireann's latest forecast says.

They say Monday will be a cold, bright and blustery day with sunny spells and scattered showers, some hail showers in parts and possibly falling as sleet on high ground in the north.

"The showers will be most frequent in the west and northwest. Highest afternoon temperatures of 5 to 9 degrees in moderate to fresh westerly winds, easing later," they added.

"Becoming very windy, potentially stormy, later on Monday night and during Tuesday with rain and hill sleet moving up over the country followed in turn by sunny spells and scattered showers, some possibly wintry. Western and northern areas likely to experience the strongest winds but all areas at risk of severe winds especially near to coasts.

"Still very windy and locally possibly stormy, round the coast on Tuesday night and for a time on Wednesday with cyclonic winds followed by blustery northerlies. These will bring showery conditions over the country, with the risk of some wintry falls in parts but clear or sunny spells too.

This weather system has prompted the weather warning from Met Éireann.

"A dry, cold frosty night will follow on Wednesday night with light northerly winds and a few freezing fog patches too. Thursday looks mainly dry and cold with sunny spells, but some rain expected to follow on Thursday night," they said.