A look back at the biggest showbiz stories of 2021 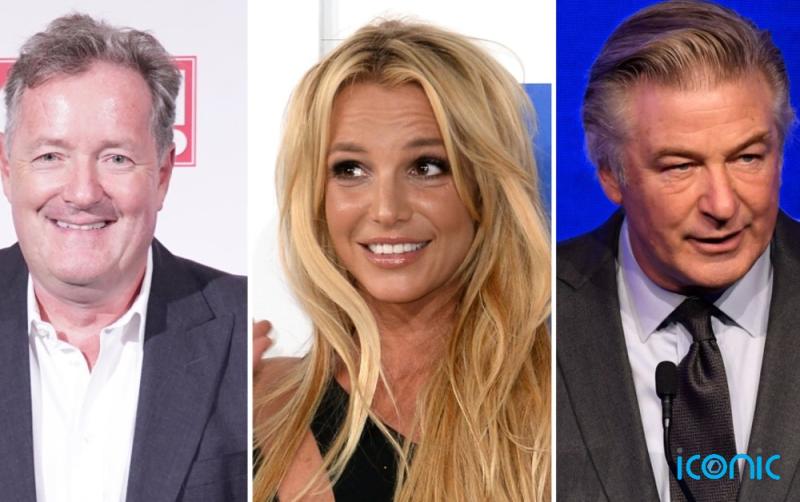 Piers Morgan, Britney Spears and Alec Baldwin made for some interesting stories in 2021

The Covid-19 pandemic has certainly disrupted the entertainment industry over the last 12 months, but the worlds of film, TV and music have continued to generate headlines, from high-profile divorces to celebrity deaths and long-awaited comebacks.

As the year comes to a close, we look back at the biggest showbusiness stories of 2021.

In January, Glastonbury organisers Michael and Emily Eavis announced their event would not be returning for a second year running due to the pandemic.

It also whetted appetites by announcing Billie Eilish as its Friday night headliner for 2022, and Diana Ross as the act playing the legends slot.

Reality TV star Kardashian filed for divorce from West in February, citing irreconcilable differences, after they married in an extravagant wedding in 2014.

But West, who has legally changed his name to Ye, has repeatedly called for Kardashian to reconcile their differences.

Kardashian is currently romantically linked to comedian Pete Davidson and the pair have been photographed holding hands on a number of occasions.

March saw former tabloid editor Morgan leave the ITV show in high-profile circumstances over controversial comments he made about the Duchess of Sussex.

He said he did not believe claims made by Meghan during her interview with Oprah Winfrey, and his comments sparked more than 50,000 complaints to Ofcom – the most in the media watchdog’s history.

Morgan has since announced he is joining News Corp and Fox News Media in a deal which will see him host a new global TV show.

In April, the 83-year-old was named best actor for his role in The Father, directed by Florian Zeller, in which he plays an ageing man struggling with memory loss.

He became the oldest person to win an Academy Award for acting.

Sir Anthony paid tribute to Black Panther star Chadwick Boseman, who died following a private four-year battle with colon cancer, and had been tipped to win the prize for his performance as an ambitious trumpeter in Ma Rainey’s Black Bottom.

Music superstar Jennifer Lopez and actor-producer Ben Affleck got engaged in 2002 and looked set to marry before going their separate ways.

Rumours of a reunion began to swirl after Lopez announced her split from former professional baseball star Alex Rodriguez in April.

These rumours were proved true when Lopez confirmed they were back together in a post for her 52nd birthday, sharing a kiss with Affleck while on a private yacht.

Britney Spears is freed from her conservatorship

The pop star regained control of her life and career for the first time in 13 years after a judge in Los Angeles terminated her conservatorship.

The then-39-year-old had been fighting to end the complex legal arrangement she was placed under in 2008 amid substance abuse and mental health issues.

The conservatorship had long outraged the singer’s millions of fans, but pressure to terminate it had ratcheted up over the last 12 months as the previously silent Spears brought her grievances into the public eye.

The album went to number one and gave them their 10th UK chart-topper, the last being The Visitors, released in 1981.

No Time To Die is finally released

The highly-anticipated James Bond film, Daniel Craig’s final outing in the role, was released in September following more than a year of pandemic delays.

A glittering world premiere at the Royal Albert Hall was attended by members of the royal family and the film was a box office hit.

The title track by Billie Eilish previously reached number one in the singles chart last February.

William Shatner makes history as the oldest man in space

The Star Trek star described becoming the oldest person in space as “the most profound experience I can imagine” after blasting off from the Texas desert.

With his trip, the actor, 90, delighted the millions of sci-fi fans who know him as Captain James T Kirk of the USS Enterprise.

Billionaire Amazon founder Jeff Bezos was behind Shatner’s trip to the stars through his Blue Origin space travel company.

Perhaps inevitably, the presenting duo scooped the gong at the National Television Awards for a 20th consecutive time.

The presenting duo faced competition from Morgan, who had set his sights on ending their domination at the event.

However, he did not attend and shared a photo on Twitter apparently showing him watching the ceremony on his TV at home.

In September, the BBC announced that Davies will return to the beloved science-fiction series to serve as showrunner after departing the show in 2009.

The It’s A Sin writer, who was behind the 2005 revival of the Time Lord, will replace Chris Chibnall when he exits the show next year alongside current star Jodie Whittaker.

Davies will make his return to celebrate the 60th anniversary of Doctor Who in 2023.

Death on the set of Rust

Hollywood star Alec Baldwin accidentally shot and killed cinematographer Halyna Hutchins when a gun he was holding went off during filming for the Western film in New Mexico in October, with the film’s director Joel Souza also injured.

Production on Rust has been halted indefinitely while authorities investigate the shooting, with Baldwin saying in his first TV interview since the incident, which aired on ABC in the US, that he did not pull the trigger and “couldn’t give a shit about my career any more”.

Ten people died when fans surged toward the stage during a performance by headliner Travis Scott at the two-day Astroworld music festival in Houston, Texas in November.

Nine-year-old Ezra Blount was youngest person to die from injuries suffered during the crush at Scott’s concert, the others who died ranged in age from 14 to 27.

Scott has said he did not know fans were injured until just minutes before a press conference following the show.

Ryan Fischer was almost killed in a robbery in Hollywood when he tried to stop the pop star’s dogs from being taken in February.

The dog walker was shot while looking after Lady Gaga’s beloved French bulldogs.

Two of the animals – named Gustav and Koji – were snatched while a third, called Miss Asia, escaped.

Adele released her much-awaited fourth album, titled 30, in November and to critical and chart success.

The singer, 33, who now lives in Los Angeles, recently returned home to film An Audience With Adele, which was recorded at the London Palladium and aired on ITV.

It followed her sit-down with American chat show host Oprah Winfrey for a two-hour special, which was broadcast on American network CBS the week before.

The special was comprised of an exclusive interview as well as a pre-recorded live performance.

The singer discussed a range of topics such as her son Angelo, her father’s death and her dramatic weight loss during the interview, which was filmed in the same rose garden where Winfrey conducted her headline-grabbing interview with Harry and Meghan earlier this year.

She will also head to Las Vegas in the New Year for a string of performances there.