'The impact far outweighs the issues,' as Carlow ramps up preparations for the Ploughing

'Just ask the question, no hidden agenda, nothing covered up, all on the table from day one...' 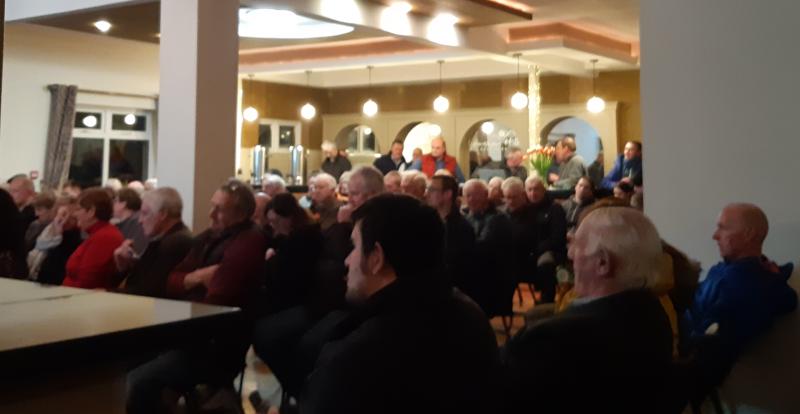 A full house at the former Leinster Hills Golf Club

The first public meeting to discuss the 2019 Ploughing Championships in Carlow was held on Thursday night in the former Leinster Hills Golf Club with those in attendance told that preparations on-site will begin in mid-July.

Anna Marie McHugh, who works with the NPA as assistant managing director, then gave an overview of the NPA, the voluntary association and the Ploughing Championships.

Anna Marie said: "We usually get them and we hope to get them this year."

She told the meeting that the NPA "always try and develop something new in a new county" and she called on Carlow people to "put their thinking caps on if Carlow is particularly good at something and to let us know".

Anna May addressed the meeting and said: "We are grateful to all the land owners we have met and sincerely look forward to working with the Carlow people.

"We'll be endeavouring to get as many people as possible staying in Carlow. We want to make sure that every available bed is filled, there will be huge financial benefit to the county."

Eamonn also spoke and welcomed the NPA to Carlow and added that it was a "great honour to be hosting this event as counties are begging her (Anna May) every day of the week to bring it to them".

"It's something you're going to remember for the rest of your life, when the Ploughing was here," he added.

The last time the Ploughing was in Carlow was back in 2006 and he said it was the biggest event Carlow ever had and at that stage over four days there were 200,000 people who came but they're expecting 300,000 people over three days this year.

He thanked each and every land owner for their cooperation and added: "Thanks to all of ye, this event is going to be going ahead."

After Eamonn spoke, attention turned to the agenda of the meeting which started with traffic management.

Superintendent Aiden Brennan of Carlow said it was a huge event to come to Carlow and he was delighted to have it and to work as part of the planning for it.

"The major talking point evey year is what was the traffic like, if it was good, the Supt usually gets promoted," he quipped to laughs from those in attendance.

He told people that he would ensure traffic moves freely and that he can't promise there won't be delays or diversions but it's a huge event for the area.

"Any concerns, come talk to us about it, we will work through any concerns or difficulties, nobody should feel they're trapped in their house for three days and can't get out, that won't happen," he advised.

There will be a dedicated line for local issues/emergencies over the course of the Ploughing and there will be detailed traffic plans for Tullamore, Port Laoise and all towns affected around the area.

The next item on the agenda was accommodation with Carlow Tourism leading the charge on this front.

They'll be putting up posters at bus shelters and train stations and anyone with accommodation will be advised on how to offer it for attendees and they can register their availability.

Anna May said a lot of bookings are already in and anyone with information can contact Eileen O'Rourke at Carlow Tourism.

Anna May perhaps hinted too at a second year for the Ploughing in Carlow and said: "What happened in Tullamore was people happy with accommodation year one booked again. This is year one of a new venue."

People will be able to put details up on a website and register themselves, for more information people can go to the Carlow Tourism website or the NPA site.

There were no shortage of volunteers to help organise events like the fashion show, livestock stands and the hunt chase which is testament to how Carlow people are embracing the Ploughing in their county.

Carlow native Margaret Connaughton will look after entertainment as she has done it for the last six years.

Anna May said: "We try to get local talent and don't go in for major bands, schools like to get involved."

The ICA have 18-hours to fill over three days and plan to do it with talks, demonstrations and the programme will be made out for anyone to see over the next few weeks.

Organisers said they have started and are "pleased to be able to do it".

Anyone looking to do Vintage Displays must be booked in through an association if you want to display. For more information, you can contact the NPA.

For the sheep shearing, organisers will try to source sheep locally and 500 sheep are needed for three days.

Applications are open from people who want to do car park stewarding, it's GAA or rugby clubs in the area who usually do that, they've been advised to get on to the NPA now because "once they're gone, they're gone".

They will allow local charities to fundraise but its confined to six or eight and there are a few in already, Anna May warned.

She added: "If we didn't restrict that we'd be roofing every church or school in country."

They want experienced stewards to help with the car parking as they did have stewards before and "the first cars that come they'd park them inside the gate".

Anna Marie then spoke again and said: "We don't have specifics about which roads will be closed or one way, we don't have that right now.

"If there are questions about weddings or that, we have a room available for a clinic and that'll be available for every meeting.

"I can't say it isn't going to affect the area, cause it will, but only over the three days.

"We want local music groups or dance groups, we want to get them from here, right down to the opening ceremony with the President, to use local talent, people from next door.

"If you're to get involved in the event, you'll have a real appreciation and real ownership of it.

"There is interruption of daily activity of this area but what we've been told is that the impact far outweighs the issues."

She added: "Every petrol station, every coffee shop, hardware store, will gain from it. Opportunities are there, we'll talk to everybody and talking is what makes it work.

"People hear stories about the event, is it true such a thing...is it true the place is closing down and we can't get bread...stories just evolve so quickly, just ask the question, no hidden agenda, nothing covered up, all on the table from day one, this is what you make of it.

"Any job that we can give locally, we will use local people."

Eamonn added that having visited the lands for the ploughing competition, he said it was one of the "finest ploughing sites that the national has ever had for a national event" and he paid tribute to the Brennan brothers for offering the land.

Cllr John Murphy appealed to the people of Carlow to buy into the Plouging and give those who come a "big Carlow welcome".

"It's all about customer relations and making sure they come back. Carlow won't be found wanting in tourism," he added.

The next public meeting could be the beginning of April or the second week of March.