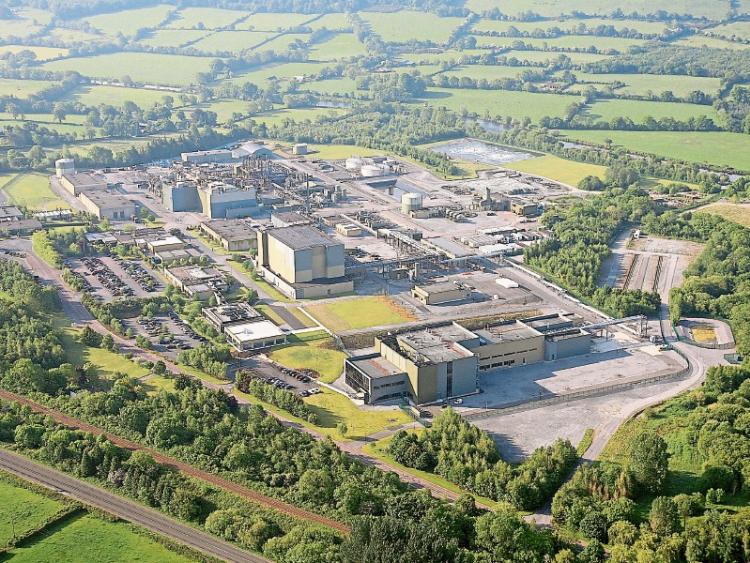 An aerial view of the MSD pharmaceutical plant at Ballydine, Kilsheelan

Pharmaceutical giant MSD is planning a major extension of its plant near Carrick-on-Suir that would lead to the creation of approximately 20 extra jobs at the factory and provide work for about 220 trade contractors and building workers during its construction.

Tipperary County Council is due to decide this  week on whether to approve, refuse or seek further information on a planning application for the 6,400sqm extension to the Research & Development and Formulation building at the MSD plant  at Ballydine, Kilsheelan.

The plant produces  medicines for  conditions and illnesses ranging from  HIV, diabetes and migraine to  asthma and osteoporosis.

If the project gets the planning green light, MSD hopes to complete design and initial construction work this year and start full construction in 2021 with a view to the new building being operational and commencing production in 2023.

Brian Killen, MSD Ballydine’s plant manager, revealed the expansion of the facility will result in the hiring of approximately 20 new staff in the areas of product development, operations and quality at the plant, which already employs 500 people.

He said in the short term the construction of the extension would be supported by approximately 220 people, such as trade contractors and construction workers, peaking in 2021.

MSD wouldn’t comment on how much of an investment the proposed three-storey extension will involve but Mr Killen said it will contain the latest equipment and technology to support the development and launch of new medicines the company develops in the coming years.

He said the R&D and Formulation building extension was part of MSD’s latest wave of investment at the Ballydine facility.

“Work relating to many of MSD’s key pipeline medicines is undertaken at our state-of-the-art research and commercialisation facility and we export to approximately 25 countries around the world for further processing.

“With this in mind, we are continuously focused on the future and on how our site can be ready to support the development and launch of the next wave of important medicine.

“This has led to significant regular investment in the site over recent years and will ensure our facility continues to be invested in by our global company, in recognition of the role we play in realising the medicines of tomorrow,” he continued.

Mr Killen said the team at MSD Ballydine are “very excited” to attract this  investment from its parent company and regard this proposed expansion as a “further endorsement of the highly skilled team” working at Ballydine and the important work they do.

MSD submitted the planning application for the R&D and Formulation Building extension to Tipperary County Council on July 2.

The application proposes situating the three-storey extension to the northern elevation of the existing building and developing it in two blocks to a maximum height of 19.94m.

It also proposes the creation of 30 new permanent car parking spaces, a temporary construction compound and contractors’ parking area to support the development as well as  modifications to internal site roads, underground drainage and utility services, footpaths, the realignment of internal fencing and a new storm water attenuation tank.

The council received one submission from the Department of Culture, Heritage & the Gaeltacht, which notes the proposed development requires groundworks in an area of possible archaeological potential due to its proximity to recorded monuments that are subject to statutory protection.

The Department recommends the inclusion of a planning permission condition that MSD employ an archaeologist to monitor the groundworks.

The submission states that should archaeological feature deposits be found, the groundworks shall be stopped pending further advice from the Department.

It adds that the applicant shall be prepared to be advised by the Department in relation to any necessary mitigating action.

MSD Ballydine is one of five MSD plants in Ireland employing approximately 2,500 people.

Its other  Irish operations  are located in Carlow, Cork and Dublin.

The multi-national recently announced the conclusion of an agreement to acquire an additional site in Dunboyne.

MSD says it has invested $3 billion in its Irish operations to date and its annual turnover ranks it as one of Ireland’s top 20 companies.

“Significantly, our Irish sites manufacture approximately half of MSD’s top 20 products, saving and enhancing lives in over 60 countries around the world,” said the company.