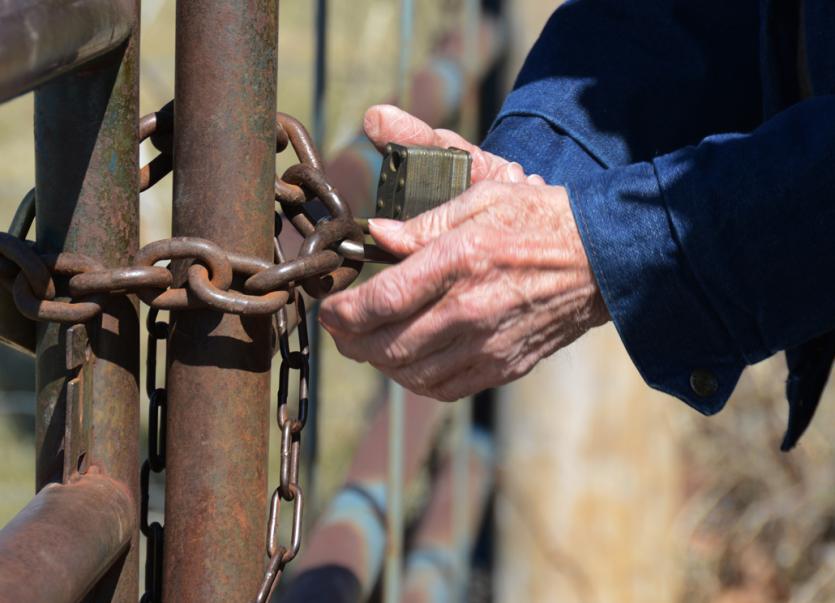 Gardaí have advised Carlow farmers to 'lock up and light up' to help prevent farm thefts.

Farm thefts nationally have fallen by 8% in the last year, but Gardaí warn against complacency with €1.4m worth of goods stolen from farms in last year.

Animals worth €350,000 stolen between September 2017 and August 2018 and around 1 in 3 tractors stolen from farms are stolen with the key

Around 3 in 4 of vans stolen from farms are stolen with the key Gardaí are also advising farmers to lock gates, light up their yards and remove keys from vehicles to help prevent thefts from farms.

While figures from the Garda Analysis Service show that farm thefts nationally fell by 8% from September 2017 to August 2018, Gardaí have warned against complacency with €1.4m worth of goods stolen from farms during that time.

The figures are released as the Gardaí launch their marquee at the National Ploughing Championships 2018. They will be providing crime prevention advice on farm security at the marquee, as well as personal safety and home security advice.

According to the figures, there were approximately 1,100 reported farm theft incidents between September 2017 and August 2018.

Read also: One in eight workers employed in the agri-food sector in South East, but Brexit and profitability pose risks

Incidents in the last 12 months were more likely to occur at night than during the day.

"Although farm thefts have fallen by 8% in the last 12 months, I would caution against complacency,” said Sergeant Graham Kavanagh, Crime Prevention Officer for the Laois/Offaly Garda Division.

"Farms are businesses and as such I would advise each farmer to restrict access to their yard, lock gates when not in use and ensure the property is well lit; more farm thefts occur at night than during the day," he added.

Sergeant Kavanagh urged farmers to ensure that machinery, tools and vehicles are secured properly, and details such as serial numbers or property markings are recorded and photographed.

"Store keys safely; too many vehicles are taken from farms with the key in them. Join a Community Text Alert scheme and report suspicious activity to Gardaí,” said Sergeant Kavanagh.

1. Restrict access to your yard, install and lock gates.

2. Ensure your yard is well lit.

3. Take pictures of your machinery with your unique ID features.

Animals
In the last 12 months, there were just over 100 incidents of farm animal theft. The value of the animals stolen was approximately €350,000 with cattle accounting for over half of this total.

Tools
In the last 12 months, there were just over 200 incidents of tools being stolen from farms. The value of tools stolen was approximately €260,000, a slight increase of 2% on the previous 12 months.

Trailers
In the last 12 months, there were almost 100 trailers, valued at approximately €222,000, stolen from farms. Over €80,000 worth of property was stolen along with trailers in the last 12months. This was made up of items such as farming equipment, copper, machinery and tools.

Vehicles (including bicycles)
In the last 12 months, there were approximately 150 vehicles stolen from farms, down 13% from the previous year. Quad bikes and tractors are the vehicles most commonly stolen in farm theft.

• Around 1 in 3 tractors stolen from farms are stolen with the key.

• Around 3 in 4 of vans stolen from farms are stolen with the key.

• Around 1 in 6 of quad bikes are stolen with the key.
‘Key’ Things to remember

• Keep your keys on you, not in the vehicle!

• Tractors and quad bikes are the most commonly targeted vehicles.

• Store quad bikes out of sight when they are not in use.

• Take photos and record the details of your vehicles.

• Mark them with a code unique to you.