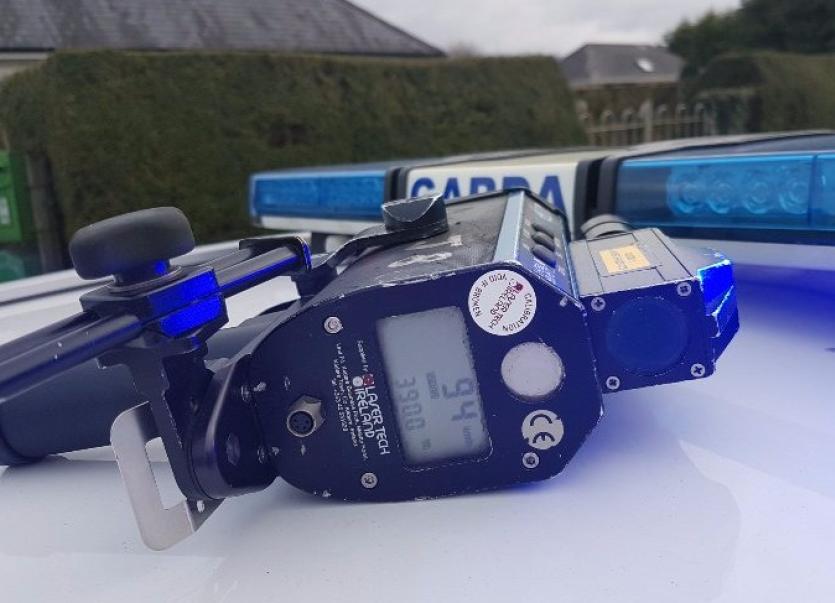 An Garda Síochána will conduct a national speed enforcement operation "Slow Down”, supported by the Road Safety Authority (RSA) and other stakeholders, for a 24 hour period from 7am on Friday, October 19  to 7am on Saturday, October 20.

The objective is to reduce the number of speed related collisions, save lives and reduce injuries on our roads.

The aim of "Slow Down day” is to remind drivers of the dangers of speeding, increase compliance with speed limits and act as a deterrent to driving at excessive or inappropriate speed.

As part of the last operation in May, Carlow clocked highest speed nationwide in 50km/h zone from GoSafe safety cameras.

The highest speed per speed band from Gosafe safety cameras for Slow Down in May of this year revealed that on the R702 at Ballymurphy, Borris a motorist was detected doing 79km/h in a 50 km/h zone.

The higher the speed, the greater the likelihood is of a collision happening and the more severe the outcome of that collision.

As a general rule a 1% reduction in average speed will bring about a 4% reduction in fatal collisions, and this is why reducing motorists’ speed is essential to improving road safety.

"When someone decides to speed they put members of their community at risk, including children, older people, cyclists and other motorists. Nobody has the right to do that.

"We have been running the "Slow Down” safety initiative since 2012 and every time the vast majority of drivers support it by sticking to the speed limit so firstly, I would like to thank all drivers who help us keep the roads safe.

"Unfortunately, there are still hundreds who do not, and travel in excess of the speed limit – some significantly so. We cannot emphasise enough how much risk this is causing to themselves and others.

"Each one of these speeding incidents could potentially cause a serious or even fatal road traffic collision. Please do the right thing and stick to all posted speed limits, not just on Slow Down day, but every day and if conditions dictate, reduce speed even further."

Chief Superintendent Murphy added: "There is a massive amount of advance notice via print, broadcast and social media for safety initiatives such as this. There are drivers who see and hear this but choose not to drive safely.

"Please don’t be one of the drivers detected speeding on Slow Down day or any other day, and choose to keep yourself and others safe on the road."

Moyagh Murdock, Chief Executive of the Road Safety Authority said: "I would urge all drivers to show their support for National ‘Slow Down’ Day and every day by easing off on the accelerator.

"Inappropriate speed is a factor in a third of fatal crashes each year and those most at risk from speeding are vulnerable road users like pedestrians and cyclists.

"Initiatives such as this are very important as we head into the winter months, when the weather deteriorates and roads are more likely to be wet. This means increased stopping distances when braking, so slow down and leave a greater distance between you and the vehicle in front.

"It’s also vital that your tyres are roadworthy. Remember brakes stop your wheels, but it’s your tyres that stop your car.

"The Gardaí and the RSA have gone to great lengths to tell people about this safety drive and that’s because it’s about stopping people from speeding not catching people speeding.

"I appeal to all drivers to slow down and save lives on National ‘Slow Down’ Day."

The operation will consist of high visibility speed enforcement in speed enforcement zones, which now number over 1,000, as well as the delivery of a road safety message through the use of national, local and social media.

Government Departments, Local Authorities, Public and private sector fleet operators have been invited to participate in the initiative by circulating employees with the key message to "Slow Down” and, whether driving for business or private purposes, to always drive within the speed limit and at a speed appropriate to the prevailing conditions.

All speed enforcement zone locations are available on the Garda website. The penalty for speeding is 3 penalty points and an €80 euro fine if paid within 28 days.