It looks so futuristic! 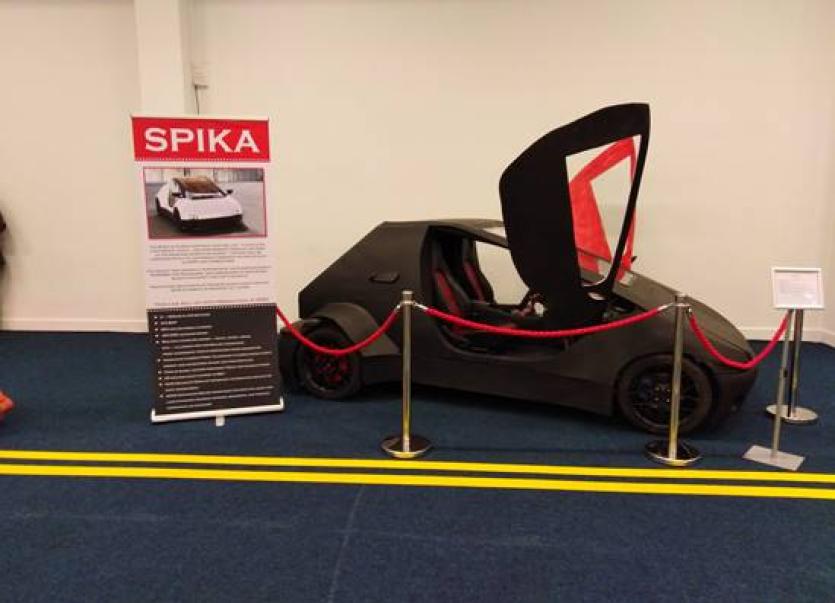 A prototype of the spectacular Irish hand-built Spika was unveiled at the Energy Show in the RDS on March 27/28 and attracted huge public and media attention.

The body will be composed mainly of lightweight composite materials such as GFRP and carbon fibre. The car doors are scissors type as seen on Lamborghini cars among others.

The project was initially supported by the European Union’s INTERREG IVA Programme, and administered by DCU Invent, Queen’s University and the IT Dundalk.

Seed funding to bring it this far included Angel, crowd, private as well as assistance from Leitrim County Enterprise Board. Fintos Electric Cars now needs a further €2.25m to get the Spika into production.

Mike Keane the Chief Technical Officer is originally from Limerick. He formerly worked with Williams Engineering (Williams F1) and has headed teams on prototype electric cars for Aston Martin on the Rapide E, Nissan – the Bladeglider, which was showcased at the Rio Olympics.

He was also was involved in the development of the Jaguar i Pace currently on sale in Ireland. In addition, while working in Williams he headed a team of engineers who made 5 Jaguar CX-75s for the Bond film Spectre

Designer John Corrigan worked for Lola cars on a LeMans racing car. He also worked for Lotus/Renault Sport in 2017/2018 on the chassis and wing design of the Formula 1 car. Currently, he is working for Red Bull Racing on the amazing Aston Martin Valkyrie Hypercar.

John from Castlepollard has helped with body design and is involved in the chassis design of the Spika.

Prototyping was started by Fintos Electric Cars in January 2018 in Carrick on Shannon, Co. Leitrim and the RDS was the first public outing for this amazing car.

It is capable of reaching 100km/h from a standing start in 3.8 seconds and will reach a top speed of 160km/h.

It will be able to travel 600kms between charges.

Tom Finnegan CEO of Fintos Electric Cars said: “This car will go on sale towards the end of 2021. We are looking for investors or anyone who feels that they can help us along the road to production to get in contact with us."