Everyone pull together! Carlow communities reminded to 'Think Before You Flush'

Irish Water have removed more than 8,000 reported blockages from the sewer network so far this year 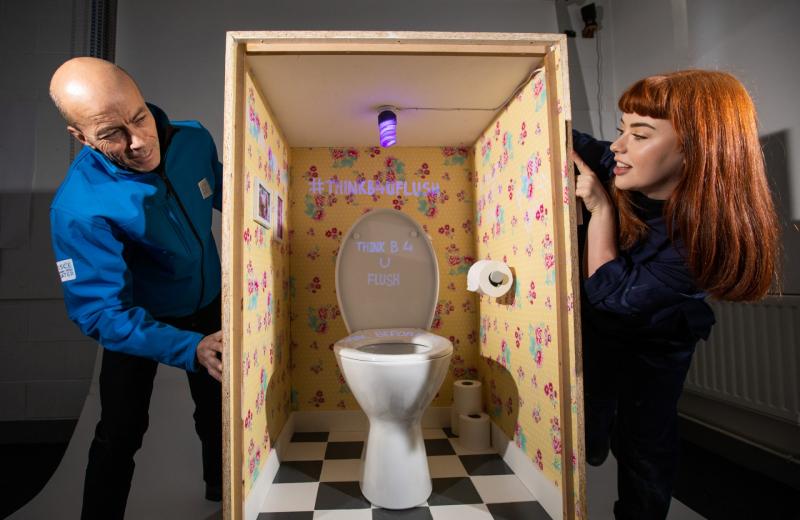 Let's everyone pull together! Carlow communities have been reminded to "Think Before You Flush".

Clean Coasts, Irish Water and the National College of Art and Design (NCAD) have collaborated to highlight the "Think Before You Flush" campaign as they unveil an installation of four toilets with a difference.

The toilets will be displayed in Heuston and Connolly stations in Dublin.

The collaboration marks the launch of the fourth year of the Think Before You Flush campaign and the installation will be showcased in public locations across Ireland in the coming months.

Students from NCAD Bureau+ worked on the toilets as part of a “Design for Debate” project.

Their brief was to bring the issues raised by the “Think Before You Flush” campaign to the public’s attention in a creative way.

Each toilet highlights a different element of the campaign, from the size and scale of the problem to the impact our flushing behaviour can have on the environment.

Speaking about the installation of four toilets, Ian Walton, NCAD Bureau+ said: "We have used Design for Debate to provoke conversations around peoples flushing behaviour.

"Using simple white toilets as a blank canvas, we tasked the designers to respond to the environmental issues created by flushing rubbish into the sewer system.

"What they have created is four very different pieces, each of which is engaging and hopefully will grab people's attention on their commute. If we can educate even a small percentage of those people and change their behaviours then our job is done."

“Think Before You Flush” is a public awareness campaign about the problems sanitary products and other items can cause in our marine environment and our wastewater network when they are flushed down the toilet.

When the 3 Ps (Pee Poo & Paper) are flushed down the toilet they travel along the sewer network to our wastewater treatment plants, where they are treated and the effluent is returned safely to our rivers and seas.

Speaking about the size and scale of the problem associated with flushing the wrong things down the toilet, Tom Cuddy, Irish Water said: "Every day people flush thousands of sanitary items such as wet wipes and cotton bud sticks down the toilet instead of simply putting them in the bin.

"This causes blockages in our network, pumping stations and wastewater treatment plants. These items can also end up on our beaches.

"We have removed more than 8,000 reported blockages from the sewer network so far this year, dealt with thousands of other blockages during planned work and we have also removed thousands of tonnes of ragging from wastewater treatment plants around the country."