PICTURE: Woman living on Carlow/Laois border is Ireland's Midwife of the Year 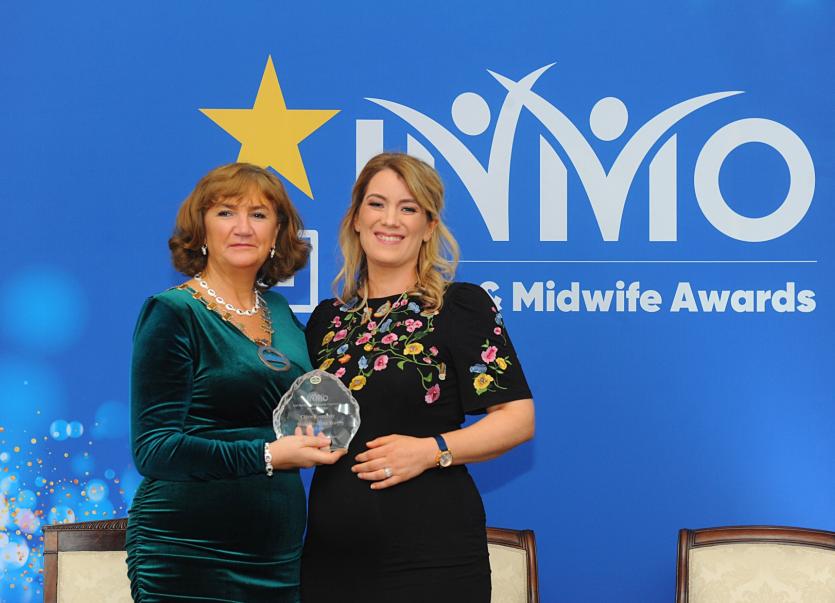 A Laois midwife, Clare Kennedy, who works in St Luke’s General Hospital, Kilkenny, is Ireland's Midwife of the Year for 2019.

The Nurse and Midwife of the Year Awards were relaunched this year by the Irish Nurses and Midwives Organisation (INMO) to celebrate what the organisation describes as 'incredible works' by its members across Ireland. They were presented in the Richmond Event Centre in Dublin on Thursday night.

The INMO says Clare provides holistic care to women, their families and babies. She was nominated by her team for “going above and beyond” in her patient care, while also being a supportive voice to colleagues.

“I’m still in shock to be honest," declared the Registered Advanced Midwifery Practitioner who lives in Ballickmoyler.

"I got a call from the INMO to tell me I had won the award while I was at work and I was just so humbled and surprised; I just couldn’t believe it.

“There is a whole team here who work really diligently to make the service run so well. It’s a really innovative and evidence-based service.

“I also want to thank the management team here for their ongoing support. I was nominated by my colleagues so I am taking them for afternoon tea in Kilkee Castle so we can all celebrate together,” said Clare who is a native of Maganey.

After completing her nursing BSc Nursing Degree and HDip in Midwifery in UCD, Clare went on to train both clinically and academically in Health Assessment, Midwife Prescribing, Obstetric Ultrasound and Examination of the Newborn. TCD (2013-2015 MSc Midwifery).

Clare, who lives on the Carlow/Laois border was registered as an Advanced Midwife Practitioner in 2018. The INMO says her role now involves providing women-centred holistic care to women, their families and their babies.

She is the clinical lead for all aspects of physiological childbirth in SLGH which advocates and empowers women and midwives in their decision-making process and which offers alternative choices in the type of care and birthing options that are available.

Clare has been nominated for the ‘Midwife of the Year by her team, The Integrated Community Midwifery Service at St Luke's.

"They tell us that Clare goes above and beyond in her role on a daily basis working not only as a caring reassurance to the women using the SLGH maternity services but also as a support to the team around her and an advocate for the future of research-based clinical practice in the Maternity sector Nationally.

"For Clare, being a midwife is not just a job, but a passion and this holds true in her character as well as her professional contributions," said the INMO.

“There is no shortage of talent, skill and dedication amongst Ireland’s nurses and midwives. Our panel had an incredibly difficult choice, but it is an honour to consider Anna and Clare as colleagues and fellow INMO members.

“Throughout the nomination process, one thing we heard over and over from patients was that all nurses and midwives deserve awards for the work they do. Our professions are often undervalued by the government and employers, but it’s heartening to know that the public hold us in high esteem," said the General Secretary.

She added that the awards are a part of the INMO’s commitment to Nursing Now, a global campaign, run in collaboration with ICN (International Council of Nurses) and WHO, which aims to raise the profile of nursing and midwifery and to highlight the essential contributions nurses and midwives make to healthcare.

The winners were chosen by an expert panel of nurses and midwives in the INMO. Each was awarded €5,000, thanks to sponsorship from insurance firm Cornmarket.